In the first half of 2022, premiums from direct insurance and accepted reinsurance reached over 12.5 billion euros, with a 7.3 percent increase, and the attributable result stood at 338 million euros, which represents a 7.3 percent decrease with respect to the same period the previous year.

MAPFRE’s consolidated revenue in the first six months of 2022 reached 14.8 billion euros, with a 5.1 percent improvement.

Financial income from investments reached 1.1 billion euros, 22.2 percent less than the same period the previous year. This decrease comes primarily from Spain as a result of the BANKIA VIDA exit, as well as from lower gains in Unit-Linked products.

Finally, other revenue went up 19.9 percent, primarily due to the increase in positive currency differences and the improvement in income from MAPFRE ASISTENCIA.

Premiums from direct insurance and accepted reinsurance reached over 12.5 billion euros, with a 7.3 percent increase. This growth is impacted, on the one hand, by the issuing of the extraordinary multiyear policy in Mexico in June 2021 and the exit of BANKIA VIDA the same year, and on the other hand, by the positive behavior of almost all currencies against the euro in 2022.

Non-Life premiums grew 8.1 percent, primarily from improved issuing in Auto and General P&C lines, which are up 9.0 and 6.7 percent respectively at June. Improvements in General P&C is thanks to the favorable development in Brazil, Spain, and United States, while growth in Auto is primarily due to improved business in Brazil, United States and Colombia.

Premium growth in the reinsurance business is also noteworthy (+14%) thanks to market hardening.

The Group’s combined ratio stood at 98.3 percent at the close of the first half, mainly affected by a deterioration of the loss ratio driven by the pressure in Motor. It also reflects some impact from late claims reporting related to the drought that took place in Brazil and Paraguay in the first quarter of the year. The 2-point reduction in the expense ratio is noteworthy, reaching an excellent level of 27 percent thanks to very strict cost control in all areas.

The accumulated attributable result in the first half of the year reached 338 million euros, falling 7.3 percent, with strong profit contribution from core operations and outstanding renewals at MAPFRE RE. The strong reduction in Covid losses, especially in Life-Protection in Latam, has helped mitigate pressure in Auto.
Million euros.

Total consolidated assets reached nearly 63.1 billion euros at June 2022 and are down 1.3 percent compared to the close of the previous year, in large part due to the lower valuation of the investment portfolios, partially offset by business growth and currency appreciation.

The Group’s shareholders’ equity is down 9.9 percent on the year, mainly as a result of the reduction of unrealized capital gains due to rising interest rates, which was partially offset by currency appreciation, especially the US dollar and the Brazilian real.

The Solvency II ratio for MAPFRE Group stands at 205.3 percent at March 2022, compared to 206.3 percent at the close of December 2021, including transitional measures. This ratio sits comfortably near the midpoint of our target range and is aligned with our risk appetite.

The world is in constant transformation, and we want to have a leading role in it. We’ve designed a new Strategic Plan for the 2022-2024 three-year period, a plan that also features a new philosophical framework. We’ve adapted our business vision to better fit the reality of the company that we now are.

The current complexity of the world and of the insurance business means we need to make profitable and quality products and services available to our clients. We’re underlining the very core of what we are, which is being the trusted insurer for our clients and other stakeholders.

Our values serve to guide us in everything we do; they’ve been the hallmark of our group since our foundation.

Our purpose is to be by your side, accompanying you so that you can take assured steps forward, helping to build a more sustainable and caring society. In short, at MAPFRE we care about what matters to you.

The pillars on which the new Strategic Plan 2022-2024 is based are: sustainable, balanced and profitable disciplined growth; improvement of internal efficiency and greater momentum in the transformation already underway. 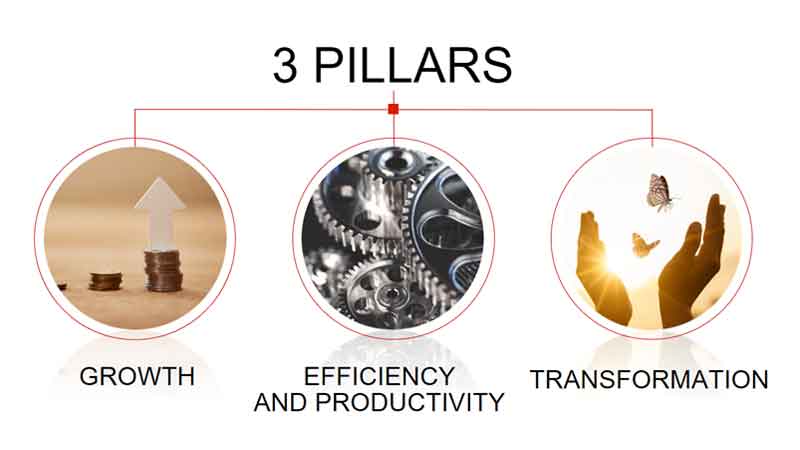 As stated in the “2021 Ranking of insurance groups in Latin America”, prepared by MAPFRE Economics, MAPFRE leads the Latin American market. Likewise, MAPFRE moves up one position in the European ranking and stands in 10th place.

The experts from MAPFRE Economics reflected on how, during the second quarter of 2022, the global economy has continued its path toward a slowdown in activity and higher rates of inflation. In the specific case of the Spanish economy, growth expectations have been cut back for 2022, from 4.2% to 4.1%, with expected growth at 2.4% for 2023.

MAPFRE continues to be the unquestionable leading Group in Auto insurance in Spain, heading the ranking in 40 provinces in the country, 12 autonomous communities and in Ceuta and Melilla, reaching a market share of 20% in Auto insurance in Spain. The company insures more than 6 million vehicles in the country, with a premium volume of nearly 2.3 billion euros in this business.

Termination of the alliance with Unicaja

UNICAJA has informed MAPFRE of its decision to terminate the alliance for the production and distribution of life insurance and pension plans through the UNICAJA network from Caja Castilla la Mancha. The transaction will be closed once the necessary administrative authorizations are received.

Santander|MAPFRE has launched a comprehensive TPL insurance product, increasing the range of products available for SME and entrepreneur clients. Since its start, the joint venture has reached a portfolio of 167,000 policies in the Auto and Non-Life Commercial Protection lines.

MAPFRE and Munich Re launch a European office property fund

MAPFRE, Munich Re and MEAG have launched a new European core office property fund focused on high-quality office properties in prime locations in Europe’s top locations. The fund volume is intended to reach around €500m by 2023 and €1bn by 2025. Both insurance groups have been successfully working together for many years.
MORE INFORMATION

MAPFRE has adhered to the Net-Zero Insurance Alliance with the aim of reaching neutral greenhouse gas emissions by 2050, which means net zero emissions in insurance and reinsurance underwriting portfolios.

The funds deriving from this transaction will be used to further strengthen the Group’s financial flexibility, in addition to diversifying its sources of financing. It is the first Tier 3 subordinated issuance by a Spanish insurer.
MORE INFORMATION

On May 31, 2022, the final dividend of 0.0857 euros gross per share was paid, after having proportionately applied the amount corresponding to treasury stock to the remaining shares.