Joan Cuscó: “Innovation is either open or it’s not”

At a meeting organized as part of the 3rd Ibero-American Open Innovation Forum, the head of Transformation at MAPFRE reflected on MAPFRE’s collaboration model, supported on intra-entrepreneurial mechanisms, startup acceleration, collaboration with the ecosystem as a whole, venture capital, etc., and offered a look into the status on Insurtech (technology applied to insurance) in Latin America, compared to other geographies.

The debate forum, under the title Invitation to resolve: cases of open innovation in Ibero America, addressed the consequences of the pandemic, which going beyond the human and social impact, has resulted in digitalization processes being sped up.

How does MAPFRE support open innovation in Ibero-America?

Cuscó explained that the company has all the mechanisms, structured around MAPFRE Open Innovation (MOi). Obviously, the region is at the heart of MAPFRE: “It was inevitable for us to focus on Spain and countries in Latin America. We launched the message of “Yes we can” through intra-entrepreneurship (#innova) to our colleagues, providing them with the opportunity to share value propositions as part of an initiative that allowed more than 3,000 employees to take part. “Afterwards, we went after businesspeople,” he reflected, offering, in addition to other benefits, “what is most valuable to us: data.” Anonymized, as per the legislation, in particular for startups involved in Artificial Intelligence (AI).

Another of MAPFRE’s major resources in the region is offering support in the internationalization process. In recent years, companies have emerged that have benefited from this and access to venture capital. According to BID, more than a thousand technology firms in Latin America billed more than one million dollars. Forty of them, worth more than 1 billion, are unicorns.

With this in mind “when we say it is difficult to make the big leagues, let’s not even talk about internationalization.” MAPFRE has successfully tried out inverse innovation in several countries like Costa Rica, the Dominican Republic and Peru, Mexico and Brazil, which are considered strategic to the company.

Asked about his vision in relation to the peculiarities of insurtech in LATAM, he offered a reminder that despite offering smaller volumes than established markets like the USA, Germany, the UK or Spain, “it is really taking off and it is where investments grow most quickly”. This backdrop is appealing to MAPFRE, particularly when combined with another peculiarity: “We are coming across more neo-insurance companies,” meaning it is possible for us to reach where big firms are unable to go. 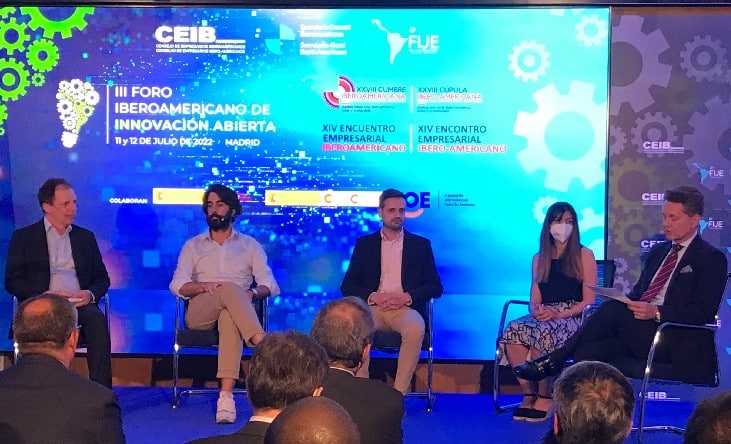 The forum ended with the guest speakers invited to offer one last sound bite. Joan Cuscó threw out a phrase that was then mentioned again on several occasions. “Innovation is open or it isn’t.” “Assuming that we all have to collaborate with one another, we should start conversations between equals,” he asserted. “We have already learned that we need to sit down, have a lot of empathy for startups, there are goals and approaches that might be different…” He offered a reminder that this humility will be particularly important in the knowledge that “in some areas, we are soon going to see a reduction in liquidity.”

In MAPFRE’s experience working with unicorn companies from established countries that provide support in LATAM, “sometimes, we don’t realize that the numbers don’t match the needs of the employment market.” Promoting the model locally is a matter of survival. We are working on this, as part of our investments in venture capital and supporting startups,” he asserted.

Innovation acts as a pillar for economic growth and a platform for bridging the knowledge gap. That’s why he didn’t just talk about corporate innovation, but also entrepreneurship, talent and sustainability as recurring concepts in the strategic approach of organizations.

The 3rd Ibero-American Open Innovation Forum responds to the mandate of the declaration by the Heads of State and Government at the most recent Ibero-American summit held in Antigua (Guatemala) in 2018, at which MAPFRE was present, committing to promoting entrepreneurial ecosystems and driving and promoting open innovation in all production sectors. The 28th Summit, to be held in the Dominican Republic in March 2023, has been given the motto Together towards a fair and sustainable Ibero-America.

Watch the video interview here: How do I become an entrepreneur? Is empathy a prerequisite? What decisions have to be taken?  (Spanish version)