Innovation is a key part of human development and is essential to achieving greater social equality. However, when technology does not reach everyone equally, the opposite effect is created due to the emergence of the dreaded digital divide.

“The Internet must be a means of communication between peoples that contributes to world peace, and the main goal of high technology is to improve the standard of living of people.” These are the words of Larry Ellison, founder of Oracle Corporation. They provide a clear example of what technology has historically offered and must offer humanity.

There are many examples every day of how the connectivity offered by the Internet has brought about small advancements. Startups and SMEs have grown exponentially thanks to the democratizing power of a technology that is accessible to a large number of people.

However, just as technology opens the door to equal opportunities, it also creates barriers that widen what is already a difficult gap to cross for those who simply don’t have access to such technological advances.

As a result, the answer to the question in the title could be yes on both accounts: on the one hand, adopting new technologies improves people’s lives, reduces poverty and even offers opportunities to those who previously had none; but such technology can also create a gap between richer countries and those with fewer resources, or, in other words, between the inhabitants of each.

But in addition to this, there are also regions where the digital divide serves to limit the opportunities of certain social groups.

In this dilemma, let’s start with that gap or digital divide that continues to grow while there remain people worldwide without access to new technologies — setting aside, of course, that their main day-to-day mission is to feed themselves and provide for their families.

Moreover, these differences are even greater when it comes to more advanced knowledge, because alongside technology itself, training is also essential in order to take the utmost advantage of new developments. “The proportion of the adult population with tertiary education is growing more than six times faster in very high human development countries than in low human development countries,” the same report explains.

For that reason, while it considers that technological innovation has always driven improvements in living standards and has increased productivity throughout history, the UNDP also insists on the need to “ensure that major innovative disruptions help everyone, which requires equally innovative policies and perhaps new institutions.”

The differences are reflected firstly at the state level, where countries like the United States, France, Germany, South Korea or Singapore stand out for their ability to adopt new technologies in industrial processes and in the labor environment.

But in addition to this, there are also regions where the digital divide serves to limit the opportunities of certain social groups. For example, this is the case for women in Latin America. The study titled “Digital rural gender divide in Latin America and the Caribbean” by IICA (the Inter-American Institute for Cooperation on Agriculture) reveals that in 17 of the 23 countries analyzed, women have less access to cellphones than men, with that gap increasing even more for those living in rural areas.

“The study reveals that reduced access to mobile phones and the Internet is yet another issue faced by rural women, who must overcome greater obstacles to secure funding, receive training, access formal employment opportunities, and own land,” states Manuel Otero, Director General of IICA. “This pattern of inequality hinders the full development of rural women, who play a key role in driving agricultural productivity and guaranteeing the stability of their families.”

The digital divide is also a problem to be solved in the field of education. In this case, it is not a question of richer or poorer countries. Rather, this issue pervades every country, since not all children have access to the same resources. 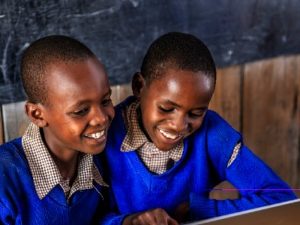 This fact has been exacerbated by the crisis caused by the coronavirus pandemic, which has created the need for education to be carried out online. In this case, Unicef looks to countries like Spain, where 97 percent of households with children have access to the Internet, according to the Spanish National Statistics Institute. However, this figure falls for lower-income families (those with a net income of less than 900 euros per month). Within this group, 9.2 percent of households have no Internet connection, implying a disadvantage that will influence the intellectual development of these households’ youngest members.

Despite these barriers, it is worth remembering that, thanks to technology, many people with disabilities now have the tools necessary for better social and workplace integration.

In addition, the globalization and democratization of technological advances—along with the work carried out by NGOs, governments and international institutions—has been one of the main factors behind the reduction in the global poverty index from 36 percent in 1990 to 9.5 percent at present.

“Evidence illustrates that globalization has helped nearly every developing country to achieve a better living standard by reducing poverty and stimulating significant improvements in various indexes related to education, healthcare, life expectancy and others,” explains Álvaro Martín in an opinion article on the Fundación Civismo website.

For that reason, access to technology provides a means for many people to have a better life. It provides the necessary connectivity and capacity for evolution for people to better develop in their current environment, to improve production capabilities, to promote equality, to facilitate access to new markets and achieve greater economic development, and even to improve environmental sustainability. Of course, as we have seen, such technology must reach everyone equally to avoid any kind of gap that tends to increasingly widen.

Accordingly, two of the targets within the ninth UN Sustainable Development Goal are to “support domestic technology development, research and innovation in developing countries, including by ensuring a conducive policy environment for, inter alia, industrial diversification and value addition to commodities” and to “Significantly increase access to information and communications technology and strive to provide universal and affordable access to the Internet in least developed countries.”