Babylon. 2,000 years before Christ. Hundreds of merchants travel from one region to another transporting goods. The risk of loss from ambushes or storms is obvious and real. Traders are aware that a number of the caravans attempting to cross the desert are going to be lost.

Today it wasn’t theirs, but tomorrow who knows if the cargo lost will be theirs. They are exposed to these risks and are starting to bear the losses jointly. Thus, with this feeling of mutual solidarity, they all jointly cover the damage suffered by a caravan or a boat, and whoever suffers the attack is not ruined. All are protected. They begin to mutualize risk… but we are talking about almost 4,000 years ago. Yes, that is where the concept of insurance begins—on the basis of trust. Trust between merchants. Still a very incipient concept, but already an early glimpse of what would later become a full-fledged business.

But the most important thing is not only that what would later become insurance began to take shape with very significant improvements and advances, but also that it is in this society where the first documents that speak of this situation are found. The Hammurabi Code, humanity’s oldest legal document, includes among its 282 clauses concepts that seem normal to us today, but which, nevertheless, at the time were an incredible novelty: mutual aid associations or agreements to share risks and thus bear losses among all. It even sets forth something that would be a novelty in maritime traffic. “Bottomry.” It was a loan, but a very special one. The merchant received financing to carry out a sea voyage. If the ship was wrecked, he did not have to repay the loan. If, on the other hand, the voyage was successful, he would have to pay not only the loan received but also interest. It is probably one of the oldest references to insurance.

Many years have passed, or rather, centuries. We are now in the year 1347. The port of Genoa. A ship, the Santa Clara, is about to set sail for the Mediterranean, bound for the island of Majorca. Hundreds of miles separate the two ports and many dangers lie in wait. Pirates, storms, mutinies on board the ship, the possibility of a shipwreck, and more, whether the ship will reach its destination is an open question.  The bottom of the seas is still littered with many ships that perished centuries ago and with them the hopes and fortunes of many merchants. The experience is tragic but the determination to achieve a mechanism to cope with this reality is even stronger. We are witnessing the birth of insurance as an industry. There, in Genoa, the first insurance policy is signed through a notarial deed. This is how the industry emerged. First through private individuals, who were almost always merchants and who took on the role of insurers or insured, as the case may be. Then, once professionalized, insurance companies took over.

But the insurance seed had now been planted. It was a mechanism to offset the losses of unsuccessful commercial expeditions with the proceeds of those that were successful. Risks were being shared. That first policy already included some concepts that, however many centuries have passed, are still in force: the valuation of risk to establish a premium, the object being insured or the period of time that the coverage will last. Naturally, they have evolved and been refined since then, but the foundation of this industry was in place by the 14th century and that basis was trust. Trust between the insured and the insurer, between merchants and navigators. This has not changed much either. It has been professionalized, but the essence remains unchanged: trust as the basis of the insurance industry was, is, and will continue to be the cornerstone of this industry.

Probably from 1347 onwards there were a number of places where insurance contracts were signed, even if they did not have these names. Some of them will have been lost, as we will have to wait almost 40 years for another document similar to the Genoa document to emerge.  This time it is in Pisa, in 1384, and a few years later, in Florence in 1397. Italy was undoubtedly the birthplace of maritime insurance. This is the origin of insurance as an industry, as a business with a profit motive, formalized, with documents between the parties.

A fire: key in the history of insurance

In the 17th century, a fortuitous but unfortunate event marked a milestone in the history of the insurance world. A small fire started in a bakery on September 2, 1666 in London but it grew steadily and wiped out a large part of the city. Thousands of buildings were destroyed and hundreds of families lost their homes and businesses. A physician, Nicholas Barbon, left his profession and created the first fire insurance company, known as the Fire Office, the oldest insurance company in the world. This is the origin of what would later become the famous metal plates on the facades of many buildings, with the policy number. Why? So that firefighting brigades would know which fires to put out. 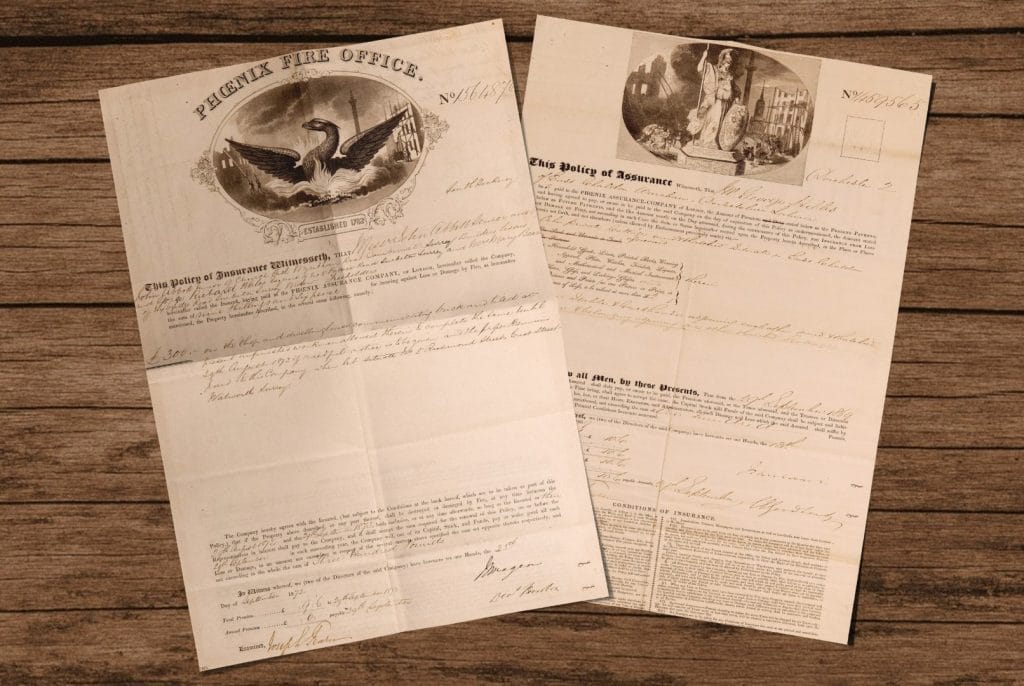 Perhaps the name of this company, despite being the oldest in the world, is not as well known as Lloyd’s (which was the name of a coffee shop, which took its name from the owner’s surname), There, in this cafeteria, businessmen, and merchants began to exchange information, discussing the most recent voyages, about cargoes moving between ports, about those that are lost at sea. Once again, the idea of risk sharing is back on the table and what is known as the first association of private insurers is born: “Lloyd’s Underwriters.” They were risk underwriters. Each one assumed a part of the risk (not all of them the same) and they would write it down and sign a document, until the risk was completed.  More rudimentary than today, but the basis is the same. Each underwriter was liable for the percentage of risk they had assumed. As is the case today. Sharing and trusting. Key concepts at that time that are still valid today.

Interestingly, Edward Lloyd was never involved in this business, but he did carry out some very important work. The publication of “Lloyd’s News,” a publication with key information: everything related to maritime traffic, ships moving from one place to another, cargoes, etc. and another very important one: setting up a place to carry out all these transactions. In fact, after his death, it was necessary to look for a new place to conduct business.

Life insurance, and something that could be considered the first pensions, would not take long to appear. This time it will be in France. Two major figures: Cardinal Mazarino and the Italian banker Lorenzo de Tonti who created a system to invest the money contributed for several people. The investors receive dividends every year as long as they are alive because when one of the members of the tontine (as they were called) dies, his contribution is distributed among the rest of the members. The capital is held until only one of them is alive, who would be the one to take all the capital. The maxim is that “the longer you live, the more you receive.” Therefore, it was very common to consult doctors to look for long-lived families among their ancestors (assuming that the current generations would also live long) in order to include them in the tontine. The laws of probability and the principle of life expectancy are at the core of this business. Is this very different from the mortality tables used today to set the annuity of a life insurance policy? Not really.

Today, insurance has become more professional, risks have evolved, others have appeared, and there are some we are still unable to even imagine. But there is one thing that remains unchanged. Trust between one party and the other, the mutualization of risks, with insurance as a mechanism to help societies prosper. This is shown by the story of the writer and journalist Giovanni Papini in New York, as he gazed out at the city from one of the top floors of the Empire State Building, at that time the tallest skyscraper in the world. A main approached and greeted him. It was Henry Ford.

Henry Ford came closer to the writer and, in a confidential tone, said:

“Without insurance we would have no skyscrapers, because no man would dare to work at such heights, at the risk of killing himself and leaving his family destitute. Without insurance, no businessman would invest his millions in constructing a building like this, when a single spark could reduce it to ashes. Without insurance, no one would drive on these streets, knowing that they could have an accident at any time. And this is not just in the United States. The whole world relies on insurance. Without it, every person would keep their money without investing it anywhere for fear of losing it, and civilization would have ground to a halt a little past the Stone Age.”