Greater commitment to tackling major risks after the pandemic

On June 9–10, MAPFRE Global Risks held the 27th edition of its international seminars event (virtually), with more than 2,500 professionals from 39 countries taking part, including risk managers, executives and experts. In a context in which risks are difficult to manage and can overlap, balancing insurance premiums makes underwriting claims and accident prevention difficult.

At this year’s event, which was marked by the various risks observed as a result of the COVID-19 pandemic that broke out more than a year ago, the biennial MAPFRE Global Risks seminar aimed to highlight the company’s commitment to tackling major risks, elaborating on two such risks with a significant impact on the sector: natural disasters and events associated with climate change.

Five years after the adoption of the Paris Agreement, the continued forecast of an increase in the planet’s temperature of 3°C (77°F) by the year 2100 will lead to a greater frequency of claims and damages, and a greater demand for insurance. A specific roundtable, moderated by Javier San Basilio, Chief Underwriting Officer of MAPFRE RE, focused on the increase in medium-sized disasters and their impact on the industry.

Another major threat is cyberattacks, which have become more and more frequent as the world has become increasingly digital as a result of its own developments. Demand for cyber risk insurance and coverage, a specific case in which the damage can rarely be remedied once it has occurred, is growing as large companies need to protect themselves.

MAPFRE shared its experience at a dedicated roundtable, emphasizing the need for a robust crisis and business continuity plan and calling for transparency in order to deal with these kinds of situations. Recently, the Spanish Data Protection Agency concluded its investigation into the cyberattack suffered by MAPFRE and stressed that the company acted diligently and transparently.

According to Francisco Marco, Chairman of MAPFRE Global Risks, the main elements that will shape the future of the industry are the evolution of the pandemic and its economic impact; the use of advanced tools to handle and assess claims; organizations’ ability to transform themselves; and advances in new technologies, which have accompanied the exponential increase in digital channels in this new environment.

Bosco Francoy, CEO of MAPFRE Global Risks, talked about the reinvention made necessary by the pandemic, the current context in which there are still impediments to all countries moving forward equally and the differentiated reactions of clients in the insurance and reinsurance industry. Risk agents have had to play “a very complex role,” he acknowledged.

A challenge for risk managers

These past few months have been a great challenge for risk agents, as well as for the insurance market as a whole, and have led to a commitment to communication that has also shaped interaction within organizations. Agility has been key to adapting to the new situation.

In a roundtable moderated by Paola Serrano, Chief Regional Officer, LATAM and International, at MAPFRE Global Risks, the experts agreed on the importance of, and lessons learned from, showing care for the team, team alignment and avoiding loneliness and isolation in order to ensure efficient, motivated teams. 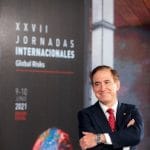 MAPFRE’s value proposition is underscored by specialization (by business lines, in managing international and captive programs and an engineering service capable of providing solutions and advice); the competence of local management and the ability to provide a comprehensive offering; agility and flexibility, based on the group’s global presence and partnerships in more than 100 countries; and its operational efficiency and long-term commitment, along with the group’s financial solvency.

“No matter how much the world changes, there will always be insurance solutions to protect assets” MAPFRE Chairman and CEO Antonio Huertas reflected in the closing session.

The need for commercial lines clients to receive assistance from insurers in their international adventures was also emphasized during the seminars. Santiago Martín, Assistant General Manager for Companies at MAPFRE ESPAÑA​, moderated a roundtable with representatives of major industry associations in Spain, in which the ongoing tightening of underwriting conditions for large company programs was discussed.

The role played by brokers, “seeking and arbitrating the best solution for each client,” as well as the importance of implementing an appropriate risk management policy for organizations, were also highlighted.

Finally, CEO Bosco Francoy took the opportunity to bid farewell to Alfredo Arán, General Manager of Global Business and Brokers for MAPFRE IBERIA, who is nearing retirement and one of the drivers of tackling major risks within the group.

Salamanca, meeting point for more than 400 risk managers from around the world