Lysa, the artificial intelligence friend for people with visual impairment

Lysa was the winning project in the latest edition of the Fundación MAPFRE Social Innovation Awards in the prevention and mobility category. We spoke with Neide Sellin, the creator of an innovative solution in Brazil that consists of a robotic guide dog with GPS that provides safety and autonomy in their journeys for those with partial or complete vision loss.

The faithful robot, which looks for routes with fewer obstacles, is already available on the Rio de Janeiro market, and has recently made the leap to Europe. The company plans to produce 20 units this year and ramp up to 360 in 2023. Fundación MAPFRE, in collaboration with IE University, has launched the 6th edition of the Social Innovation Awards. The aim is to recognize new projects that can demonstrate value in terms of their positive impact, high capacity for social transformation, and potential to improve people’s lives. You can enter yours here. 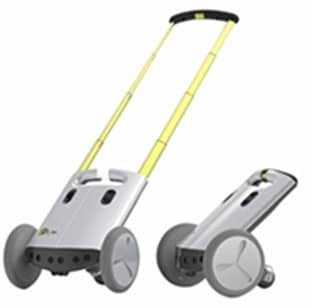 Neide Sellin was a robotics teacher who worked, in a public school in Brazil when she decided to focus on building an automated instrument that would allow one of her students, who was visually impaired, to get around more easily, and in this way, be able to help more people who had the same condition.

After many years of hard work, Neide was able to consolidate the creation of Lysa, a robotic guide dog powered by a GPS system. The device is designed to give its owners greater autonomy, independence and safety, by receiving orders through voice commands and emitting signals through sound sensors when it encounters obstacles on the road, automatically defining a safer route and providing the user with new and better alternatives for each route assigned.

Current estimates suggest there are more than 6.5 million people in Brazil with visual impairment, of which only about 200 have conventional guide dogs. This is where Lysa becomes a more affordable solution for thousands of people suffering visual impairment, as the units can be more economical to maintain than a guide dog.

Each Lysa weighs between 2.5 and 3 kilos, has an 8-hour battery (under normal usage conditions), which is rechargeable with standard plugs via a USB cable. The device has two wheels and a retractable, height-adjustable handle. This robot guide dog provides greater ease of handling and ensures more freedom, independence, safety and accessibility.

Twenty-four Lysa units have already been produced, which are active in public and private establishments such as hospitals, shopping centers and libraries, among other sites frequented by people with both visual impairment and reduced mobility.

This project, which is already well-known in Brazil, is the fruit of years of work, dedication and persistence. Its focus on care and interest in improving the lives of those who want to get around independently has made it a winner in the prevention and mobility category in the latest edition of the Fundación MAPFRE Social Innovation Awards.

In 2021, more than 200 initiatives created by scientists, researchers, university students and business schools competed from three geographic regions: Brazil, the rest of Latin America and Europe. Three entries were selected from each region to compete in the final, representing the essence of social innovation, talent, transformative capacity, and commitment to improving the environment in which we live.

Thanks to the recognition it received, Lysa has been able to break into new markets, with the sale of the first unit in Spain marking a great milestone for the company and rewarding the hard work and commitment that has characterized its founder-led team over the last few years.