Amparo Alonso: “Artificial intelligence allows not only for more quality in medical interventions, but also for more warmth”

@martivill
Artificial intelligence (AI) is like a magic wand; everything it touches somehow becomes an advance for humanity. One of Spain’s foremost magicians is Amparo Alonso Betanzos (Vigo, 1961) who, in her daily research into this technology, spurs progress. Having earned her undergraduate degree in chemical engineering and a PhD in physics in the United States, she has taught computer science and Artificial Intelligence at the School of Computer Science of the University of A Coruña since 1990 while also coordinating the Artificial Intelligence R&D Laboratory (LIDIA — Laboratorio de I+D en Inteligencia Artificial). In 2013 she assumed the Chair of the Spanish Association of Artificial Intelligence (AEPIA — Asociación Española de Inteligencia Artificial), a position she holds to this day.

In September 2021, AEPIA celebrated its 19th conference within the framework of the 6th Spanish Informatics Congress (CEDI — Congreso Español de Informática) 2020. This event brought together some of Spain’s leading researchers in the field of AI, including AI in forensic anthropology and human identification. Amparo Alonso Betanzos boasts that, in Spain, there are internationally renowned research groups in many other areas of AI, such as natural language, artificial vision, machine learning, ecological and intelligent agriculture, and urban design, to name a few.

Alonso Betanzos is involved in many different projects applying AI to simulations, as part of the European project SMARTEES, to help develop more sustainable policies in cities by modeling the population’s acceptability of certain initiatives. Other lines of research address how to make large-scale machine learning algorithms consume less energy with the same level of performance; how to improve recommender systems to deliver more personalized results; or the development of ethical, robust, and transparent algorithms that respect data privacy, serve people, and avoid bias. 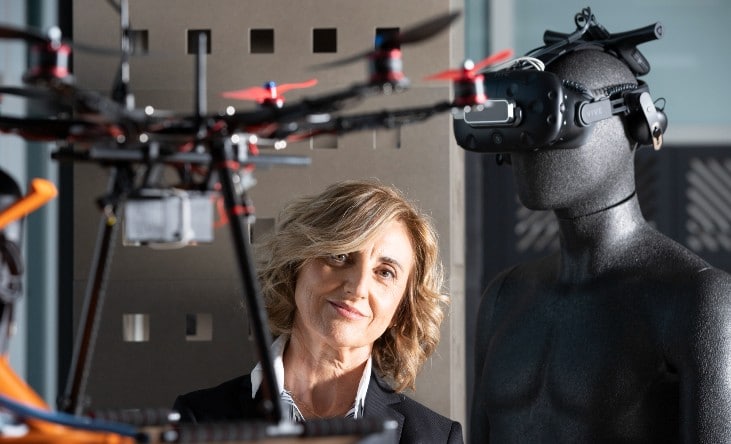 Stamping out stereotypes by giving visibility to female technologists

“In Europe, we have more robust data protection laws, because it is believed that data belongs to the citizens. In the United States, it belongs to companies. However, companies are increasingly taking privacy into account,” explains Amparo Alonso Betanzos, who recalls some of the best-known scandals involving the sale of customer data without customers’ consent (e.g., Facebook) or discrimination due to biased data, such as that of Amazon, which did not hire women for technology and IT positions because the algorithm confused the scarcity of women’s resumes with a lack of capacity or skills.

Regarding the barriers that get in the way of girls and young women studying technical degrees in Spain, Amparo Alonso claims it is a complex issue, despite the fact that many people, including herself at AEPIA, are working to overcome them. She recalls that when she started as a professor, around 30% of students were female. Today women only make up 12%. In her opinion, this regression is due to sociocultural factors, from the education received at home, “the computer is usually set up in the sons’ bedrooms,” to stereotypes from movies, series, or novels in which the techy characters are usually male. “IT, in general, is associated with a masculine profile.” The researcher points out that an effort must be made to draw attention to female scientists and technologists both from the past and today.

As the first Spanish woman to receive a grant from the L’Oréal-Unesco For Women in Science Program (1998), she believes that “more and more, and beginning not too long ago, we have seen an involution in the sense that there is immense pressure on women about how they should look, how they should behave, how they should be. For example, ambition in men is a virtue, not so in women.

The Chair of AEPIA rejects the solitary profile of computer scientists portrayed in film: “Nothing could be further from the truth. Computer scientists interact with a lot of professions, from psychologists and sociologists to lawyers and philosophers. Technology is in every cross-cutting area. It is exciting for me; with it, we will be able to define how we want the future to be.”

Toward preventive, predictive and personalized medicine

In that future, artificial intelligence will revolutionize all sectors, especially medicine and education, stresses Amparo Alonso Betanzos, because these areas have a major impact on well-being. She claims that technology and access to large amounts of data in healthcare have improved our ability to diagnose and treat while also performing less invasive and remote surgeries. And gene analysis opens the way to preventive, predictive, and personalized medicine.

Against the backdrop of these improvements, it is not a question of seeing AI as a substitute, she argues, but as a tool that will give doctors “the ability to look patients in the eye when making a diagnosis, as machines will give the more time by freeing them up from other tasks. AI allows not only for more quality in medical interventions, but also for more warmth,” she says.

Given that AI is gaining more and more ground due to its enormous capacity to generate wealth, the countries that lead the way in AI research will dominate the world. “If you don’t pursue research and innovation, you’re going to have to buy it from someone else, and that means others are going to decide for you,” the researcher warns. Today, China is at the forefront in this field. It is making an enormous economic investment at both the government and local levels, Alonso points out. Moreover, she adds, it has a very large population for testing developments: the government is the one who decides on issues of privacy and others, such as the use of facial recognition video cameras. In Europe, these issues are up for debate.

The United States is the second largest AI power. There, the government also invests money in AI, although companies invest much more. In third place is Europe, which is taking a more ethical approach to AI, at the service of people and humanity, but with a mixed investment. “We don’t have very large companies, but we do have some important players in different fields. While the investment is less, we have talent.”