Female leadership that changed the time

When Rebeca Grynspan became Vice President of Costa Rica, Council of Ministers meetings used to start at 7 am. She would always be late because she had to get her children to school first. This went on until one day some of her colleagues said they had the same issue. So they changed the time.

Rebeca Grynspan, Ibero-American Secretary General, former UN Under-Secretary-General and ex-Vice President of Costa Rica; Soraya Sáenz de Santamaría, partner in the Cuatrecasas law firm, member of the Spanish Council of State and former Deputy Prime Minister of Spain; and Trinidad Jiménez, Director of Public Affairs Global Strategy at Telefónica, and former Minister of Foreign Affairs and of Health and Social Affairs in Spain, share their reflections, concerns and anecdotes during the fourth Conversations for Leadership, moderated by Antonio Huertas, MAPFRE Chairman and CEO.

On the eve of International Women’s Day, they unreservedly addressed their public decision-making roles at an internal initiative promoted by the MAPFRE Women’s Leadership Network in Spain. The meeting—held against the backdrop of the global pandemic, which is widening disparities such as the gender gap—provided an enlightening exchange on talent, measures to promote diversity and reduce discrimination, roles, leadership qualities and memories.

The four also covered the struggle of other women, including icons like Golda Meir and Simone de Beauvoir, and the shared feeling when starting their careers that “the sky was the limit.” Now, years later when each of them is in a position of great responsibility, they are “committed to ensuring that all women can get there.” 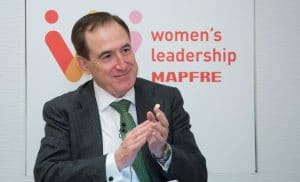 Antonio Huertas spoke of the importance of using female talent until the gap disappears and the word “talent” can stand free of qualifying adjectives. MAPFRE has been committed to equality for years, and has met its target of filling more than 40 percent of its leadership positions with women.

“We’ve all noticed someone along the way. Now that you’re all role models, how do you envisage this debate helping others?” he asked. 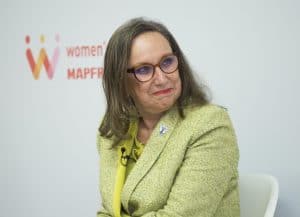 Rebeca Grynspan: Looking back, I can see that I had embraced gender roles myself. (…) I became a feminist so we could all get there. 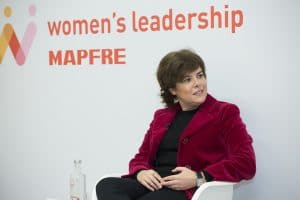 Soraya Sáenz de Santamaría: I’ve become more aware of the gap as the years have passed. As you get older, you see how discrimination is ingrained. We set up barriers and limits and accept that we can’t get over them. 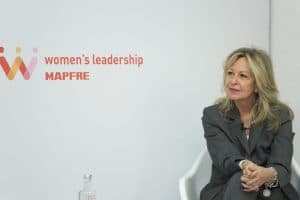 Trinidad Jiménez: When I’m asked why I entered politics, I say it’s because I wanted to get involved. My mother was 43 with 8 children when she decided to go to college. She was pregnant with her ninth child while studying for her exams. How was I going to stop myself?

They also spoke about ambition, explaining the persistent idea that an intense and genuine desire to achieve something difficult, so fundamental to professional development and breaking molds, is frowned upon in women. “Power in the hands of a woman is looked down on,” Grynspan said. Sáenz de Santamaría added, “If we want to take charge, we are perceived as authoritarian.” Still, ambition is a major asset when exercising leadership.

“If they don’t sell [support] you, you’re lost. We’ve got less time for networking. Growing in certain positions is closely linked to social relationships,” said Jiménez.

Questioned by Antonio Huertas, they all demolished the cliché that it’s better to have a female boss when you’re a woman. They’ve seen it all in their careers. Men who have believed in and promoted them; women who felt “obliged to adopt very masculine roles because the environment demanded it”; good bosses with more status than power.

They agreed on a lot: the loneliness of being a leader; the suffering and responsibility that comes with the sorts of positions they’ve held; the importance of “helping balance certain differences” within teams; the growing commitment to balancing work and family life; and the undoubted value of public-private collaboration.

To these women, life is about more than just work. That’s why it’s so important to promote the right to disconnect from work, to have access to nursery schools, and a cultural change. This is a challenge for governments and corporations, because the younger generations have a different mentality and are choosing flexibility, along with the chance to spend more time with their children and to acquire experience outside the office.

Antonio Huertas pointed to the stubborn reality of the data, despite the fact that the pandemic has shown that “the countries that have put the most effective measures in place are governed by women.” Ninety percent of heads of state and government are men, along with 76 percent of parliamentarians worldwide, according to UN data. Thirty-three percent of women who were working before COVID-19 will not return to the workforce.

“I worry about the post-pandemic situation. Everything has been taken away. The mere fact that we’re not traveling. The brake on relationships has seen us go a long way backward. We Europeans have a tremendous responsibility to Africa. Latin America is both our past and our shared future,” said Sáenz de Santamaría.

Soraya Sáenz de Santamaría: When I was Deputy Prime Minister I remember alliances were being created and they weren’t along gender lines. There’s no doubt that if you have to manage a crisis, your own ability weighs heavily on your back. A lot of women have made it after putting up with a lot.

Trinidad Jiménez: Fortunately, societies are very permeable and businesses are very committed socially. Other elements are starting to be considered when assessing financial results, like social commitment and support for diversity. What we’re doing today is the best example of that reflection and of public-private collaboration toward a more egalitarian society.

The last part of the meeting focused heavily on the importance of rebalancing the scales. This involves using tools such as training, knowing how to change mindsets when the situation worsens by introducing temporary parity quotas to close the gap, and paying heed to the indicators, such as the gender index launched by ClosinGap, the benchmark cluster for driving transformation, which MAPFRE is involved with.

Trinidad Jiménez:  Politics has been worth the effort. I feel enormously privileged. Sometimes I hear public life spoken of with contempt, but overall it’s wonderful.

Antonio Huertas: Politics has to contribute to progress.

Soraya Sáenz de Santamaría: We should return to a more reflective politics, one of debate and agreement, which translates into improvements for the common good.

Rebeca Grynspan: It’s a treasure that life has given us. That ability to know that you can change life for the better is a very powerful force. It has made me revalue many things: humility, work and honesty.