Risks on the rise: what the second quarter has in store for the global economy

A new global event (war in Ukraine) has turned geopolitical risk on its head while fueling other risks that have been present over the past two years. As a consequence, several possible triggers have arisen in the current context, which could result in an undesirable economic recession.

MAPFRE Economics, in its latest 2022 Economic and Industry Outlook: Second quarter perspectives report, examines how this new geopolitical condition has deepened the supply shock, pointing to “a notable deterioration of activity at the global level and an increase in price pressures.” The perception that the war is going to drag on has led to a downward revision of MAPFRE Economic Research’s growth forecasts, with an overview of rising risks highlighting the vulnerabilities of the global economy in the coming months. 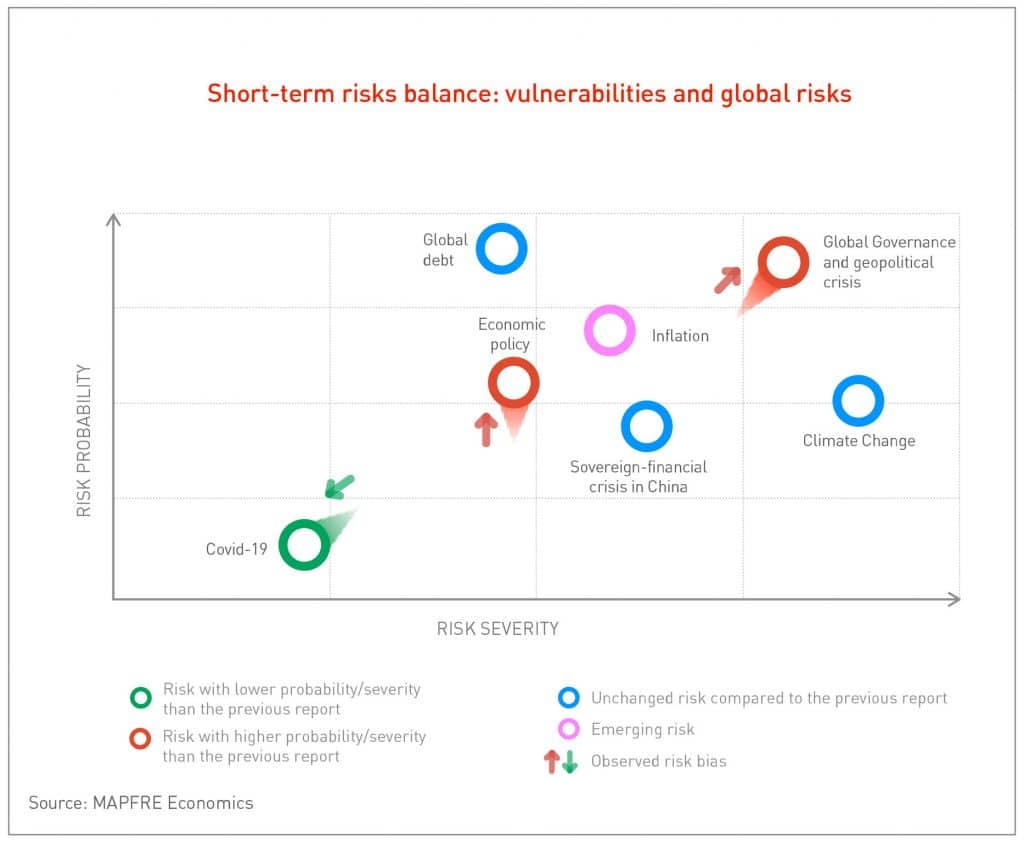 After reaching a new global all-time high in the first half of 2021 (at the highest level since World War II), the second half of last year showed a slight decline in debt-to-GDP (at 351%) “owing to expansionary economic activity coupled with higher inflation rates.” “While developed markets performed better (down 12.3 percentage points), emerging countries accumulated more than 80% of the new debt burden,” the report adds.

As inflationary pressures have become more persistent and monetary policy has begun to change course, financing through negative real interest rates could be diluted, while also accompanied by weaker economic growth. Accordingly, experts state that “the ability to coordinate selective fiscal policies is anticipated as a key aspect in maintaining some balance between current high stocks that limit potential, rising debt interest rates and declining economic activity.”

Assuming higher-than-expected inflation levels and second-round effects from commodity prices, the risk of spillover to wages, and thus to the long-term outlook for price levels, would push monetary tightening to a more precipitous phase than initially anticipated.

Although MAPFRE Economics’ core scenario remains one of gradual planning, the risk of erratic moves by central banks could be exacerbated “as they attempt to achieve neutral policies in a manner somewhat further from consensus and without enough time to assess the impacts not only on prices, but also on economic growth itself.” In this sense, the risk could be exacerbated by “fiscal policy becoming decoupled from monetary policy,” given the potential propensity to dampen the current shock by means of expansionary fiscal policies, the feedback of a more rapidly accelerating inflation and the risk of an unanticipated impact (both on the economic performance side and on the financial markets side).

Uncertainty in the Asian giant remains as the Zero-Covid lockdowns are spreading throughout the country, increasing fears of an economic slowdown, “exposing new difficulties on the consumption side, additional supply-side shocks and raising fears associated with the real estate sector,” the report explains.

The Chinese central bank, meanwhile, has continued to ease financing conditions and stimulate exports to bring some macroeconomic stability to the country. However, despite the bank’s efforts to shore up the economy, the crisis in the real estate market remains unresolved.

Added to this, “China’s ambiguous geopolitical positioning regarding the Russia-Ukraine conflict (the risk of which could trigger international sanctions that renew the uncertainty generated during the trade war of the Trump era) would further aggravate the situation, “potentially setting off a debt crisis with systemic potential for sovereign-financial contagion,” according to Economic Research.

The conflicts of the new decade have not pushed the climate issue into the background. However, the most recent progress in addressing the climate crisis (through a broad policy framework of international awareness following COP-26 at the end of 2021) has been overshadowed by Russia’s invasion of Ukraine, “highlighting broad global energy security issues,” explains MAPFRE Economics.

Disruption in energy and other raw material supplies, the Outlook report acknowledges, poses “an additional challenge to the course of the energy transition worldwide, with particular significance for the European Union and its Green New Deal plans.”

While this crisis may generate additional momentum for investment in clean energy, thus laying the groundwork for a more robust project and extending the vision for an acceleration of development plans, it  may, in the short term, require temporary increases in carbon-intensive uses. “Safeguarding the most immediate interests would mean redoubling efforts for the energy transition in the medium and long term,” the experts stress.

The epidemiological crisis, which is now becoming a thing of the past (according to the latest epidemiological report of the World Health Organization (WHO), the number of new cases and deaths from COVID-19 has been decreasing since the end of March 2022), is back in the risk scenario in China, where a new wave is forcing its government to take more drastic measures than anticipated. The drastic “Zero COVID” approach will, they estimate, have “a high economic cost” for the country.

Outside the Asian powerhouse, the gradual return to “normality,” while remaining attentive to new variants and outbreaks, means that “epidemiological risk is no longer the main conditioning factor for activity levels, as it was during the last two years,” acknowledges the Research Department. Thus, the experts’ opinion on the future prospects of the pandemic is conditioned by “the appearance of new variants, their virulence and transmissibility, and the effectiveness against them of vaccines and antivirals.”

Escalating prices remain a concern for the vast majority of governments. The current implications of inflation risk are based on a supply-side origin issue, “with special mention of the direct impact of the Russia-Ukraine conflict through the energy and other inputs that feeds back into the initial bottleneck problem produced by the measures implemented to curb COVID-19.”

In the face of these dynamics, the function of central banks’ response would result in “orthodox policies towards monetary neutrality and, less anticipated than expected, towards restrictive terrain,” the report states. In the event monetary policy measures prove insufficient to moderate demand-side inflation expectations, or the supply-side shock becomes more persistent, this would lead, the analysts say, “to an even more aggressive tightening that would penalizing consumption and economic activity to avoid shifts in inflation towards structurally higher levels.”