The 10 key moments from the Annual General Meeting

“We would all have liked to tell a different story today of what happened in the world in 2021.” That is how Ignacio Baeza, Vice Chairman of MAPFRE, began his speech at the Annual General Meeting held on Friday, March 11, at a time when all eyes are also on the war in Ukraine.

But this grim context did not dampen the celebration of one of “the best meetings we’ve ever been to,” as some of the guests acknowledged. There were a number of key moments during the event, which are summarized below:

Chairman Antonio Huertas reviewed the careers of Julio Castello and Luis Hernando Larramendi, both of whom recently passed away. Castelo was part of MAPFRE for more than 40 years, holding different positions in the Group throughout his successful career until he became chairman of Sistema MAPFRE in 1990. Larramendi was a director of MAPFRE S.A., among other Group companies, and Vice Chairman of Fundación MAPFRE. 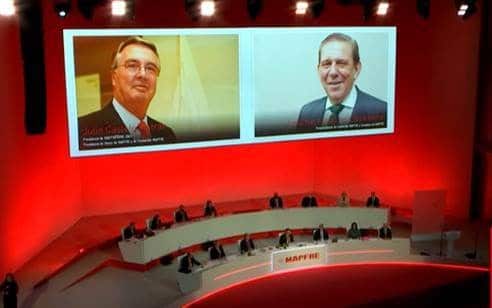 2. “People can change the world”

Baeza was the first to deliver his speech. After reviewing one of the Group’s hallmarks, its relationship with people, a section that highlighted the diversity that comes from managing an inclusive workforce, he listed the latest advances in the business and in innovation, as well as the company’s commitment to sustainability. But the summary of the role played by Fundación MAPFRE, MAPFRE’s main shareholder, was another of the key moments of the Meeting: “Fundación MAPFRE believes that people can improve the world.” Taking stock of the past decade, Baeza noted that we have invested a total of 555 million in society, reaching millions of people with a hopeful response that is aligned with the values fully shared by the Group. 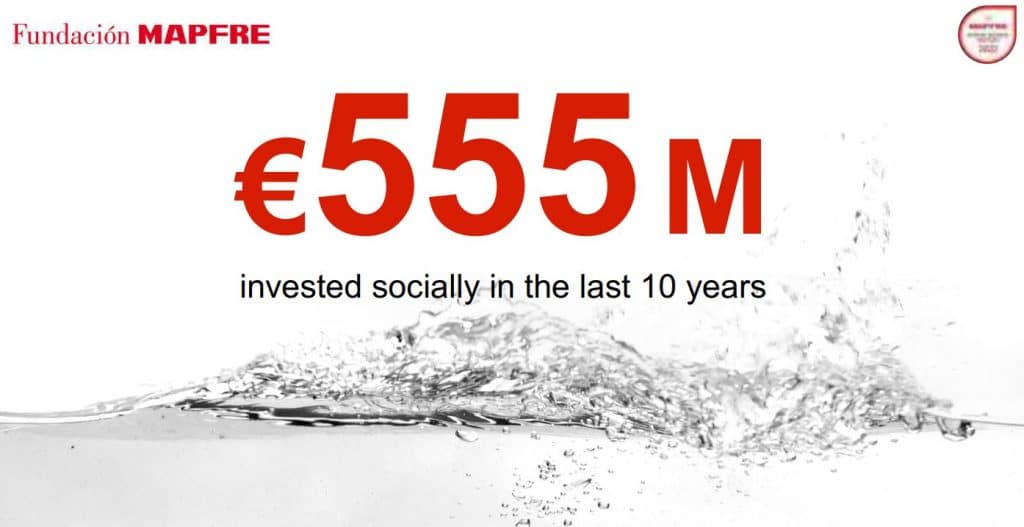 3. A year of positive results

Fernando Mata, CFO and Member of the Board, reviewed the figures for 2021. He acknowledged that the economic situation has changed in recent days, marked by the invasion of Ukraine, with new risks and uncertainties, though he wanted to highlight “the strength of MAPFRE’s balance sheet and its solvent position, which provides assurance that we can withstand situations of stress like the current one.” 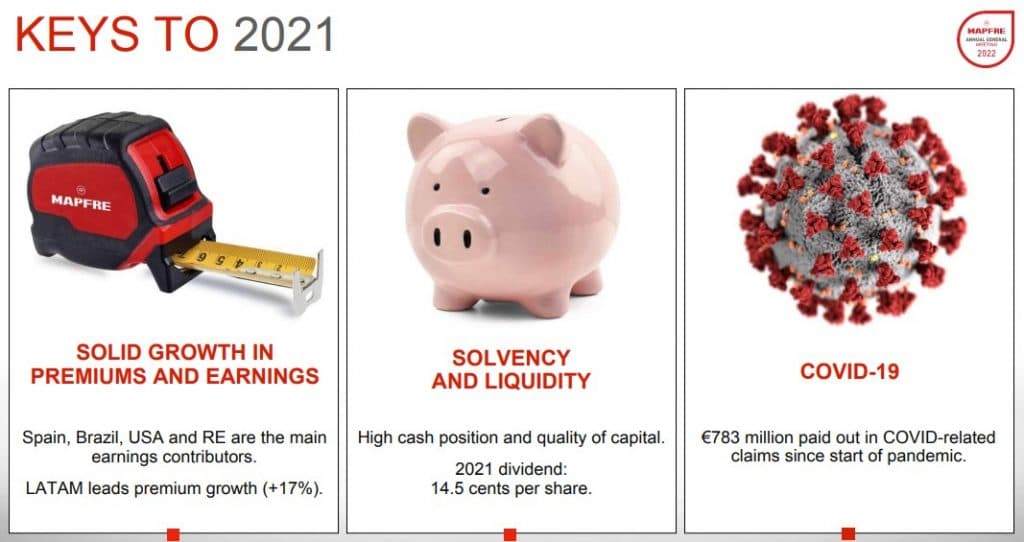 In turn, Mata mentioned the return to the pre-pandemic dividend of 14.5 cents per share, approved at the Meeting and based on a rationale of profitability and solvency. COVID has not changed MAPFRE’s commitment to the shareholder, based on a cash dividend. In 2021, shareholders collected €416 million, representing an average dividend yield of 7.6%. In the last five years, MAPFRE shareholders have received €2.173 billion in dividends.

The high dividend yield, which has far exceeded that of the Ibex since at least 2017, happened to be one of the arguments the chairman used to answer the question posed by a shareholder. In those five years, in fact, the average dividend yield of the Ibex was 3.9%, while MAPFRE’s was 6.2%. “We have been one of the most profitable Spanish companies in these five years, our performance compared to the Ibex has been spectacular, surpassing it every year and even comparing us with large international insurance companies,” said Huertas. 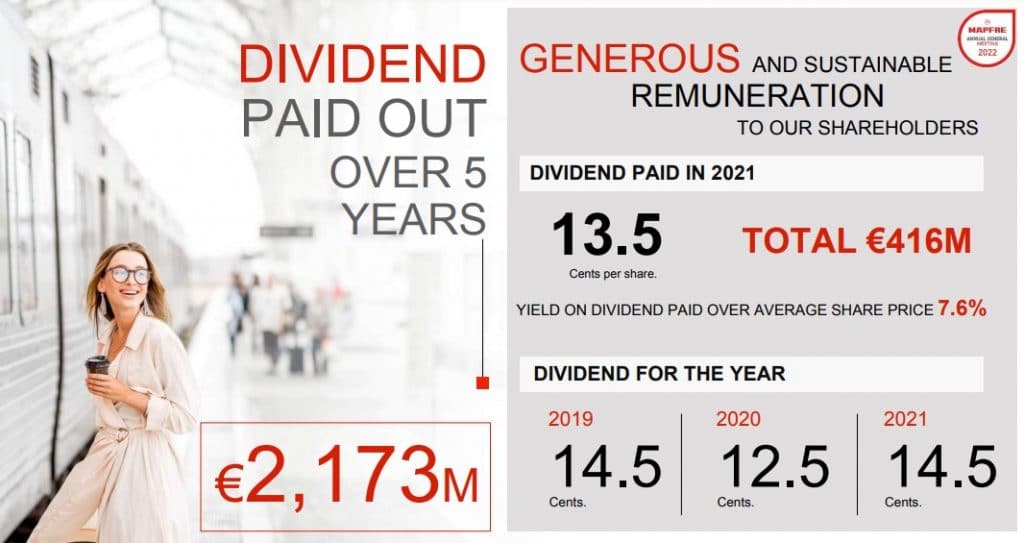 5. Main resolutions of the Board:

6. Ten years of the chairmanship

Antonio Huertas took stock of his ten years at the helm of the company. Without a doubt, this has been one of the most disruptive decades in history, one in which practically everything we knew has changed, generating an extremely challenging environment for companies and for society. After reviewing the main crises and the effects they have had on the business–for example, in the last ten years, the Group has recorded more catastrophic events of over €100 million than in its entire history, with a total cost of close to €4.5 billion–, he stated that “we are satisfied because we have been able to respond, with financial solvency and operational robustness, to the trust that customers have placed in MAPFRE.” 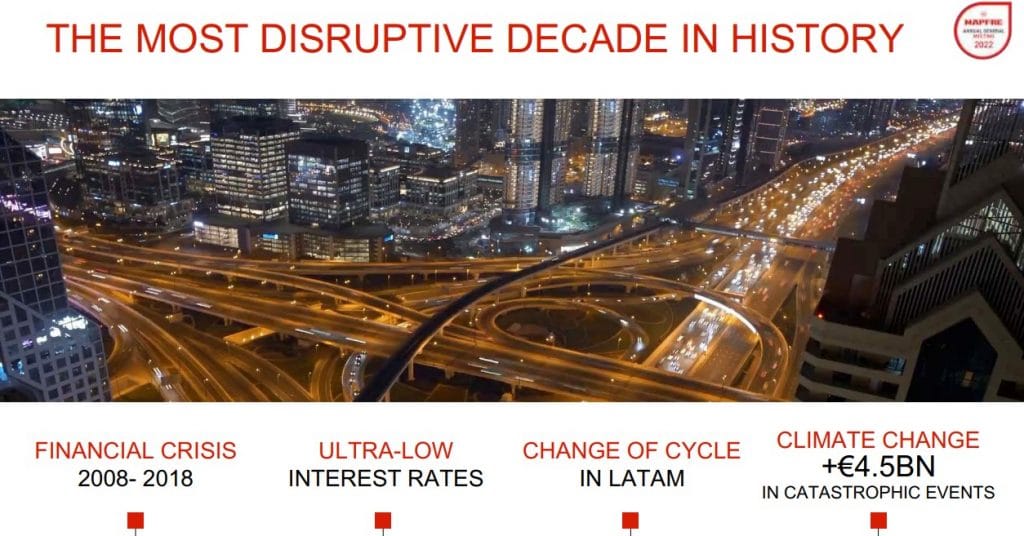 In addition to the uncertainty generated by a pandemic, which is still present, there is the unexpected war in Ukraine. “As little as my position might count in this forum, I would like to take this opportunity to express our solidarity with the Ukrainian people and to ask and to hope that the global multilateral organizations can find fast solutions to restore peace, to put an end to this terrible conflict as soon as possible. With the end of the pandemic, we saw hope on the horizon thanks to the Herculean efforts of science and large-scale plans for economic recovery, but unfortunately, humanity’s destructive obstinacy is once again leading us to the brink of the abyss,” stated the Chairman.

8. Purpose: “MAPFRE. We care about what matters to you”

MAPFRE presented its new purpose: “Our purpose is to be at everyone’s side, supporting people and institutions in order to move forward together with confidence, and at the same time, helping to develop a more sustainable and caring society. Ultimately, at MAPFRE we care about what matters to you. 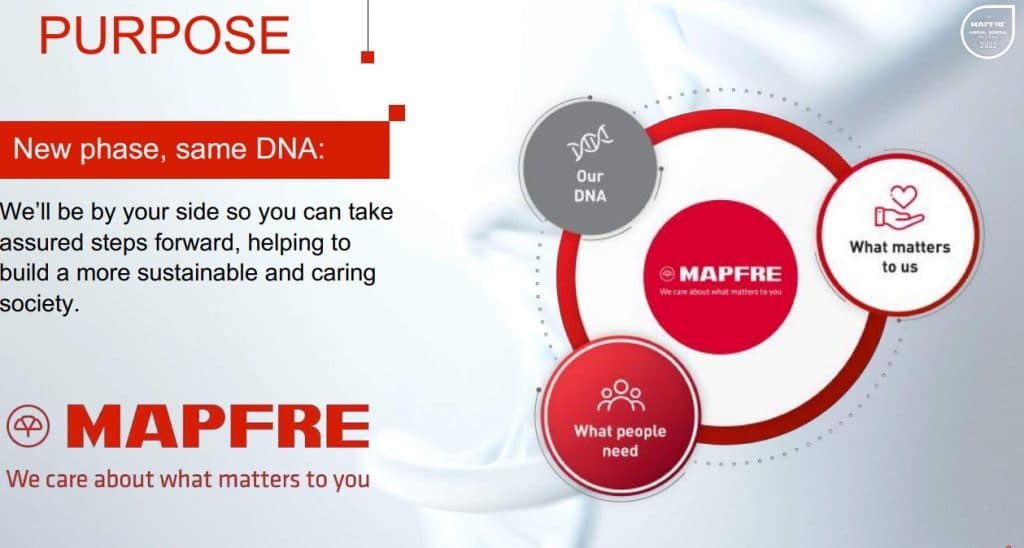 During the meeting, Huertas presented the new strategic plan.  The pillars include: 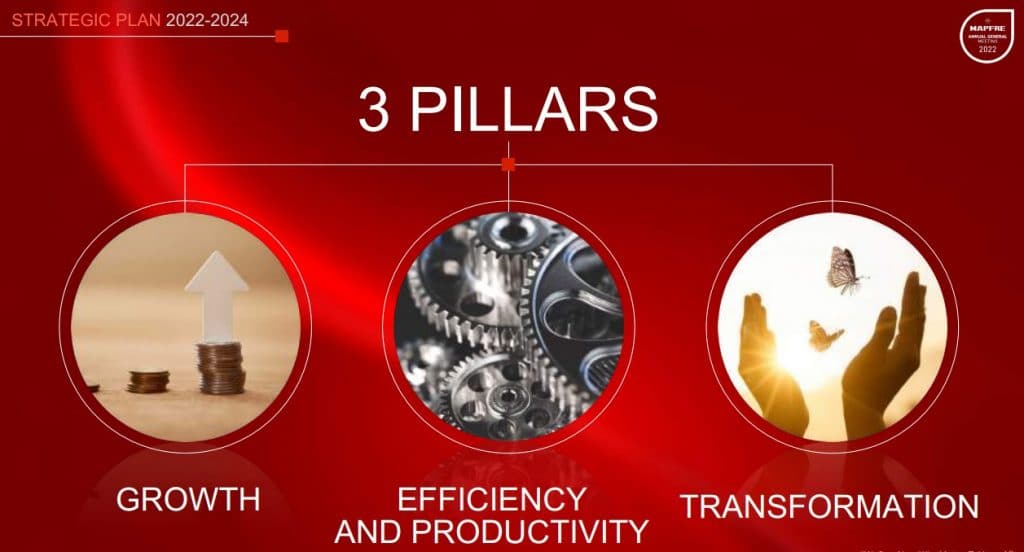 Lastly, the Sustainability Plan that will accompany the business strategy for the next three years was also presented. This plan, which sets more demanding targets than previous versions, the last having been 98% fulfilled despite the pandemic, establishes the following objectives for the period: 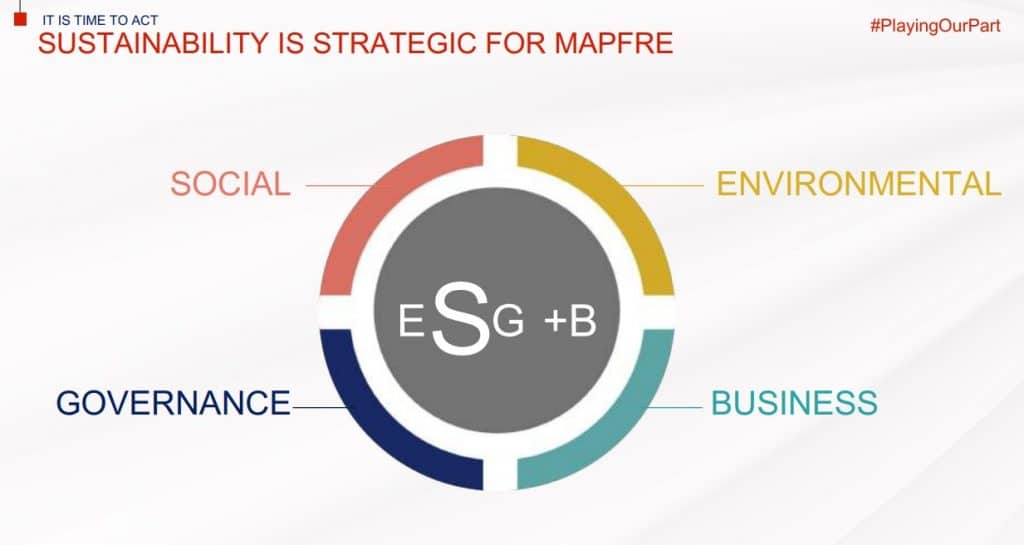