Towns devising solutions in their struggle against depopulation

The consequences of the pandemic are sounding the alarm in various municipalities facing the risk of depopulation — one of the biggest enemies of sustainable development and the environment, which are key areas of MAPFRE’s social commitment. By contrast, these same healthier environments, far from urban conurbations, have become highly appealing with the rise of working remotely and their intrinsic value as places of refuge.

Vulnerable as a result of their aging population, lack of infrastructure and being underpinned by economies that are dying out, these towns also set an example of how to confront challenges by thinking up new initiatives. San Esteban del Valle, a town in the Tiétar Valley in Ávila province, is like a miniature Eden. However, the town is at risk, with more than 60 percent of its population over the age of 50 and, of them, a high proportion older than 75. 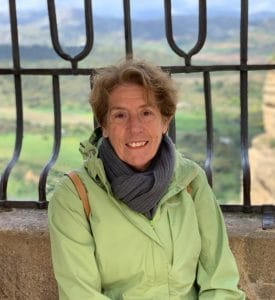 In the words of the town’s mayor, Almudena García, they have to “try everything” to revive and revitalize jobs and the economy. The town has recently obtained financial support to build an activity center — a pillar of the demographic challenge to tackle depopulation that will ensure care for the elderly and, at the same time, create job positions that will offer a future for the town’s population. The initiative, which encompasses a rethinking of the care home, has been recognized as a model of transversal work to achieve a better future for all through urban planning.

Question: The Demographic Challenge project and strategy to tackle depopulation have been very good in San Esteban, but what are they intended to achieve?

Answer: When we first put forward the idea of the Strategic Plan against depopulation, what we were intending to do was ensure we were prepared, so that we could take full advantage of any small amount of help from local administrations or other opportunities, wherever they might come from. We also wanted to raise greater awareness among the population, because at first people around the town were saying “more and more people are moving away,” but they weren’t aware of the gravity of the situation. The plan takes a number of aspects into account, including our agricultural potential, the local terrain that allows us to grow all sorts of produce, as well as our weaknesses. Everything was focused on getting back on track with the activity center project, which was held up, in order to ensure a space for a range of activities, such as looking after the elderly—both dependents and non-dependents—because we have a very old population, providing a setting where we can celebrate cultural activities, offering a space for young people to kick-start projects, housing the library and, ultimately, revitalizing the town’s social and cultural life. This is what keeps us going during winter, when all that’s left are a few old cats. This was really valuable, because we’re a small town capable of coming up with real ideas and seeking solutions.

What has been the impact of the shutdown caused by the pandemic over the past few months? Have any goals changed or has any progress been delayed?

The activity center was a project involving a number of different companies since 2006, and it was delayed for all sorts of reasons. When we finally launched it, along came COVID, just as we were ready to unveil the project. We suddenly realized that it could play a positive part in this. The technical teams, architects and architecture studios involved in the project found themselves, like the rest of us, facing a pandemic that was changing our lives and, fundamentally, our care for the elderly. They had to come up with a new urban and conceptual vision that responded to this. And we saw that vision reflected in the proposals that were put forward.

The winning proposal was called “Such an August March” and sought to brighten up the center, creating a space of optimism and comfort and one that brings a zest for life in the times that lie ahead.

Lovely and bright, comprising green areas and a joy to behold. It’s a new architectural solution. The spaces should allow people to adjust easily when problems such as the current pandemic arise. It offers the possibility of providing individual as well as collective care, and the option to isolate patients or an entire floor, rotate workers and set up bubbles if the situation so requires. It was also important to look at things from a health perspective, to be able to turn it into a medical setting if necessary and to open a pathway for those who need to socialize, while also giving a voice to those who are looking after people at this time. This social and healthcare aspect is what we now have to address, given that the architectural proposal has failed. 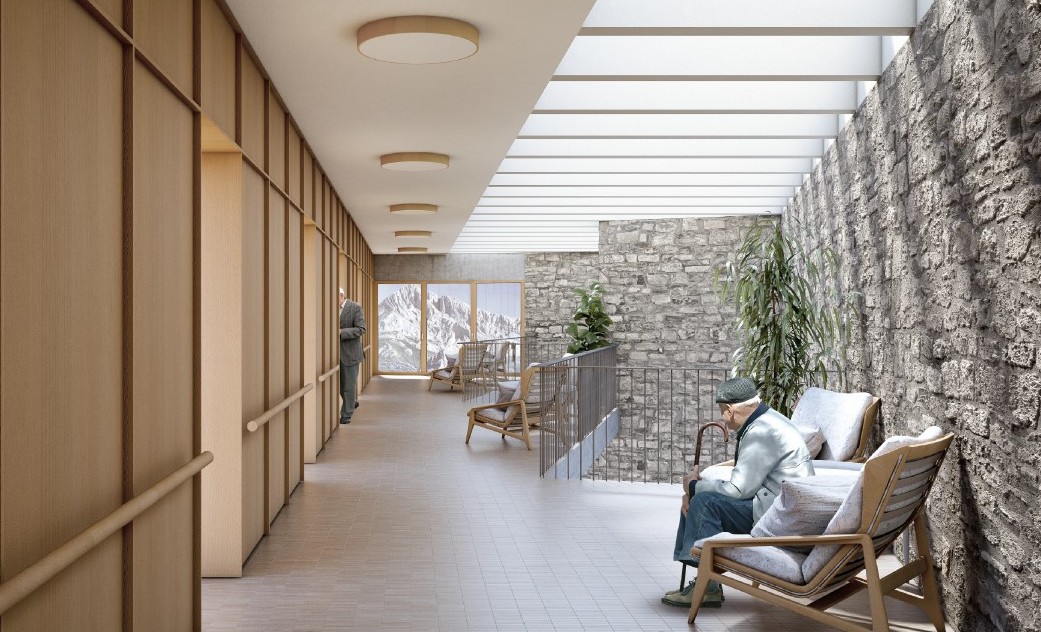 Sight of the activity center in San Esteban del Valle

Is the activity center intended to act as a pillar for a better future for the area and its young people, while also seeking to provide care for the elderly?

We need more space. The center will bring everyone together within a small plot, such as elderly dependents and those occupying the space for workshops and cultural activities, the library and a multifunctional room that can be divided into different spaces. The project is ambitious, but the space we have to play with is small. There is an adjacent building that we are trying to acquire, because it has a party wall and would allow us to offer a wider range of services. Young people in San Esteban have few prospects. The job positions on offer are related either to agricultural work, construction or cleaning. A center that requires specialized job positions in fields such as physiotherapy, care for the elderly, administration, cooking or other opportunities will breathe new life into the town.

Other projects underway to revitalize the economic life of the town…

We’re thinking of offering entrepreneurs another area where, for a modest fee, they can set up small offices to meet with their clients, for example. We’re developing the idea for another premises we’ve acquired where we’d like to relocate the Permanent Information and Tourism Office. This would also entail contracting a mountain bike center, given that there is a high demand for cycling in the area, while also offering a co-working space. What we’re looking to do is support young people and give them the best possible chance to get up and running. For example, there’s a couple who want to set up a winery and who are researching the grapes through biodynamic farming and need a place to do so, and others who are thinking of opening a laundromat for the care home and other tourist accommodation.

I’m also very much focused on women. Women in San Esteban need to have job opportunities beyond those offered at the care home. Women are adept at caring for dependents, but we want to go beyond that.

And there’s another part to the Strategic Plan — a resource bank. We’re trying to implement this because we understand that there shouldn’t be so many abandoned farms, olive groves or vineyards, which are all stand-out products that come from our area, but many of which are not being produced because people have moved away. This also applies to premises and houses in the town itself, so people know they are there and available as permanent or weekend residences.

What concerns do you have at the moment?

We need energy and to recover our former dynamism in order to further develop projects, bring us into the future and provide hope, because COVID is consuming us a lot of the time. That resource bank is an important element. At the onset of the pandemic, we didn’t know how long it would last. Lockdown was hard, but in a way it became easier to manage things. It helped skip over that exacerbated part in me of taking care of the elderly — taking care of everybody. It was easy to organize because, even in lockdown, I didn’t stop working. The town hall was open first thing every day and I thought it was important to show leadership and be a point of reference. Now there’s a protocol for everything. What concerns me is making sure we don’t fall by the wayside — we have to make sure we continue to provide suggestions and daily information. We have a WhatsApp group that includes more than 600 of the town’s neighbors and a Facebook page for those who don’t live around here. Keeping people informed is vital — telling things how they are and looking for glimmers of hope. This is something I’ve learned: I think people have to know what’s going on to be able to offer their collaboration.

And that same thinking applies when you ask for help from other administrations. The important thing isn’t what we say, but finding the necessary means. There are lots of towns out there in need of a boost to come up with real solutions. Provide fiber-optic connectivity to all municipalities and maintain transport connections, even if it’s loss-making in certain areas. We can’t abandon the people.