Everything you need to know before switching to electric cars

Javier Caamaño Malagon
Until recently, electric cars were seen as a rarity – prototypes destined to inhabit some distant future rather than an actual spot in your garage at home. But this situation quickly changed due to growing concerns about climate change, which has drawn attention to less polluting types of mobility. Encouraged by the authorities, sales of electric vehicles (EV) are growing rapidly year on year, and now we’re seeing them everywhere on the roads, especially in large cities and in the countries making the biggest inroads (pun intended) on this technology. 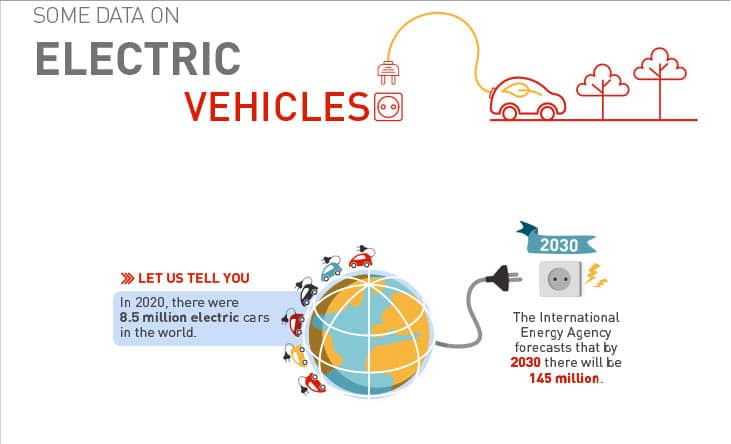 MAPFRE is closely watching this course change. In Spain alone, new insurance policies for EVs rose by 150 percent compared to last year; in the case of plug-in hybrids, this figure is up almost fivefold. The word on the street is that they’ll become increasingly popular, until we reach the point where the majority of drivers make the switch from gasoline pump to electric charger. And with all that, most of us don’t really know a whole lot about EVs.

Do they really consume less? What range does a single charge give me? How and where can I charge my EV? These are some of the questions that arise about EVs for those not familiar with them. To answer these questions, we turned to the professionals at CESVIMAP, MAPFRE’s Road Safety and Experimentation Center, a benchmark in research in the automotive sector, with more than a decade of experience studying this type of mobility. 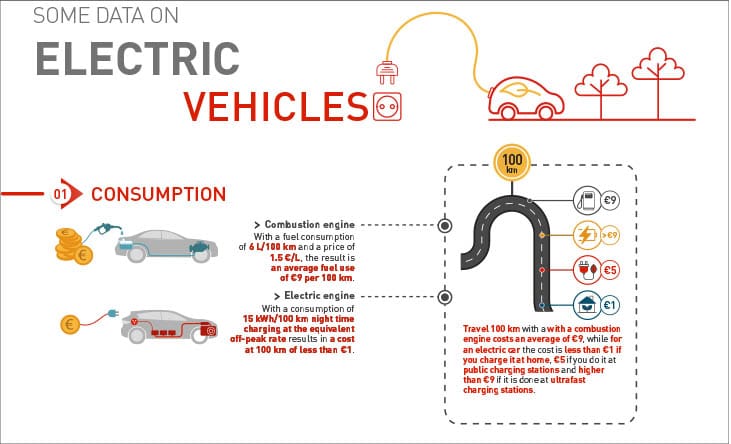 With the EV however, the cost depends on how and when it is charged, so this also explains the different types of electric recharging.

Assuming consumption of 15 kilowatts per hour (kWh) at 100 kilometers, a charge during the night with a typical off-peak hourly rate would put the cost per 100 km at less than one euro, and would take about 6-8 hours. This is the ideal option: having a charging point installed at home and leaving the car charging overnight is much more economical, and in the long run it will compensate for the higher initial price of the electric car. Installing a charging point at home costs between 400 and 1,600 euros, but many countries offer financial incentives to do so.

Another possibility is public charging stations in places such as shopping malls or parking lots. They usually have a higher level of power and in about two hours the battery could be at 80 percent capacity, so these points are also known as semi-fast recharging. There, the price of the charge increases considerably, and it would be around five euros to cover 100 kilometers. It’s still a more cost-effective option than gasoline or diesel. 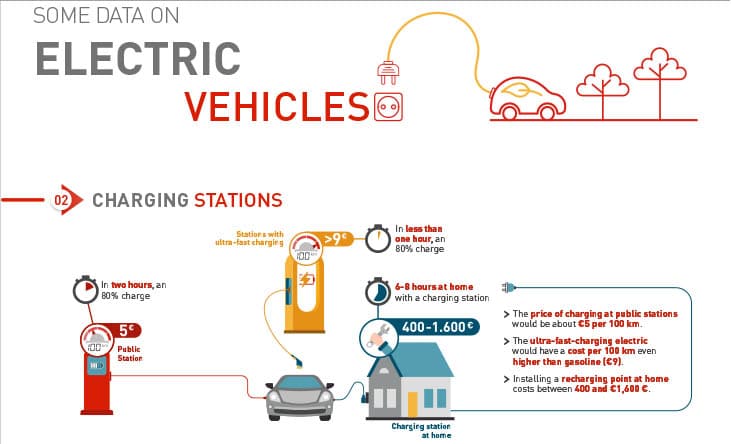 The other option is to use electric car pumps, with DC chargers that are much faster, but also more expensive. Here the battery would be 80 percent full in less than an hour, although with a cost per 100 km that may even be more expensive than that of a conventional car. It’s a useful option for occasional trips outside where you work or live, but shouldn’t be used on a regular basis. In addition, it should be noted that fast charging degrades batteries to a greater extent.

Along with charging points, the other aspect that may cause drivers to be most wary of EVs is their range. So, how many far can you go your EV?

The most common models on the market offer batteries with a real range between 150 kilometers and 450 kilometers.  This should be more than enough for daily commuting, but the snags start to hit when you want to go further. This has become clear in the tests carried out by CESVIMAP technicians: outside its native habitat – the city – an electric car’s consumption shoots up. Plus, consumption can be even more impacted by adverse conditions such as wind or altitude differences than a traditional car. We should interpret the standardized ranges as typical of low-speed trips with constant recharging.

And, as is the case with the different models of fuel engines depending on engine power, EV manufacturers usually offer battery-driven models with greater or lesser range, but also with significant variations in price.

At present, the battery accounts for half the price of an electric car. It will degrade and its capacity will diminish over time, and its life varies greatly depending on how it’s used; this is something consumers are used to seeing with the batteries in their cell phones. But we do have data that give an idea of the useful life we can expect. 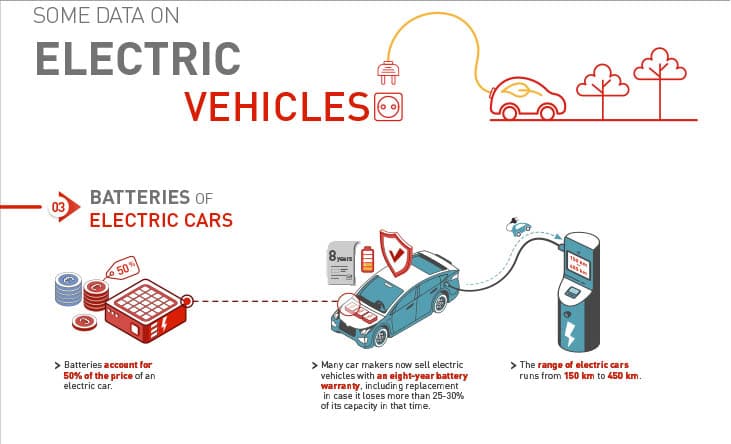 Many car makers already sell their EVs with an eight-year battery warranty that includes replacement in case the battery loses more than 25-30% of its capacity in that time. In other words, they guarantee that the battery will maintain acceptable levels for at least eight years.

Moreover, given that they are both costly and essential to a fast-growing industry, batteries are already the focus of much of the research effort. Maintenance, repair and reuse services for batteries are now being developed, so we shouldn’t expect to have to replace them with a new one after a few years of significant wear and tear.

Will all vehicles be electric by 2030?

Although the trend is clearly in favor of the electric car, current forecasts go far beyond that time frame. According to the International Energy Agency, there will be 145 million electric cars in the world by 2030, a surprisingly high figure given that there were only 8.5 million in 2020, but that’s still a small percentage of the total number of cars.

Although some countries have made quicker progress – the classic example is the Nordic countries – the pace will be relatively slower in most. This is certainly the case in Latin America where – although some countries are increasing their efforts in this direction – particularly Costa Rica, Colombia and Chile – the lack of infrastructure and economic stimuli would point to a longer time frame.

Do EVs require have specific insurance? Are they more expensive to insure?

Legally, EVs have the same obligation as any other: they require an insurance policy covering civil liability. However, they do have a series of specific needs that good insurance can offer protection against: coverage of the charging point installed at home or damage caused at public charging stations, the battery and cable, roadside assistance in the event of battery depletion for on-site recharging or replacement with another EV. MAPFRE already has a specific policy for electric and hybrid cars in Spain, Germany and Malta, with this list slated to grow, with Italy and the United States coming on stream next. 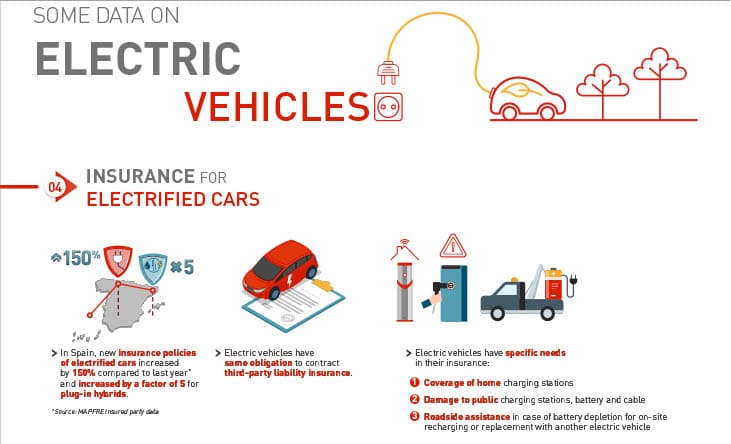 EVs are clearly in expansion mode and are shaping up to be the future default. The driver profile – more experience, more knowledgeable, good earning power, etc. – is also associated with lower accident rates, and as such, is attractive to insurance carriers. Insurers have a strong vested interest in engaging with the global transition to EVs, so policies for these vehicles are set to become very competitive.