China, United States and India are Top Countries for Insurance Potential, According to the MAPFRE GIP Index

Based on the 96 countries analyzed, the total Insurance Protection Gap is $5.675 trillion. Spain’s position in the ranking has dropped sharply, especially in the Non-Life segment, where it is 23rd.

MAPFRE Economics, which is MAPFRE’s economic research service, has updated its Global Insurance Potential Index (MAPFRE GIP) using the latest available data for the year 2020. The purpose of this indicator, which is calculated for 96 developed and emerging insurance markets, is to measure the worldwide insurance protection gap, by creating a metric that can rank those markets in terms of their medium-term and long-term insurance potential. There has not been much change at the top of the rankings compared to last year, with China, the United States, and India continuing to hold the top three positions in both the Life and Non-Life segments, representing the countries with the highest insurance potential. 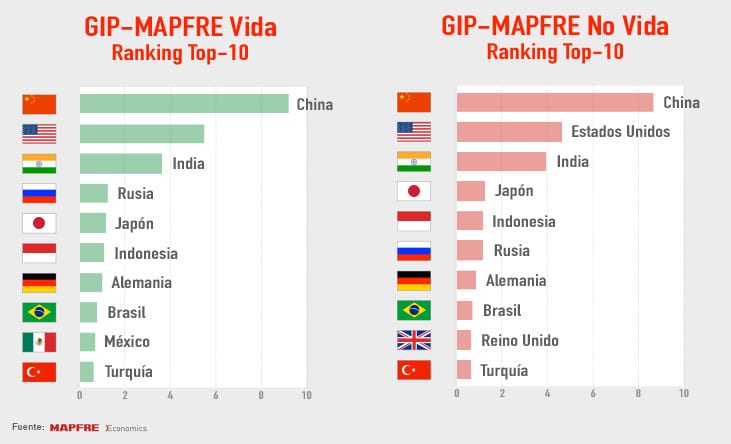 Spain’s position in the ranking has fallen, especially in the Non-Life segment, dropping eight positions to 23rd. This has resulted from a decline in consumption during the crisis caused by the pandemic, especially for cars and other essential goods, “while other lines of business have better withstood the effects of COVID‑19, largely unaffected by the economic cycle (such as Health insurance),” economists explain.

Spain has also dropped in the GIP ranking in the Life segment this year, to 18th place. According to MAPFRE Economics, this is due to a loss of relative penetration caused by an additional decline in demand for life insurance.  “Liquidity has been drained away during the COVID‑19 crisis, and this has forced many families to rely on cashing in their pension plans. The real estate market also slowed substantially. These two factors have increased the negative impact on the Life segment, with a larger effect seen in Spain because of the weight of its mortgage business, and because there is a smaller system of private pensions acting as an alternative to life insurance,” they explain.

Calculation of the MAPFRE GIP is based on estimates of the size of the Insurance Protection Gap (IPG) in the markets studied, along with the capacity of the corresponding countries to close that gap. The IPG represents the difference between the insurance coverage that is economically necessary and beneficial to society, and the amount of coverage actually acquired. It is not a static concept, but instead one that evolves in tandem with growth of a country’s economy and population, while also being influenced by emergence of new risks inherent to economic and social development.

This gap has now reached $5.675 trillion globally, or 675 basis points (bps) of the global GDP. This IPG is distributed as 68.1% in the Life segment and the remaining 31.9% in the Non‑Life segment ($3.865 and $1.810 trillion, or 456 and 213 basis points of global GDP, respectively). “In general terms, the crisis generated by the pandemic has had less of a negative impact on the Non‑Life segment than on the Life segment, and therefore, the penetration index was higher, and narrowing of the IPG was greater, in the Non-Life segment than in the Life segment. Along with the effect on premiums, it must be added that the pandemic had a major negative impact on global GDP, which has shown a more immediate decrease in response to the crisis, translating indirectly into a higher penetration index”, they conclude in the report, which was presented in Brazil.

For calculating the MAPFRE GIP, other factors in addition to the IGP are taken into account, such as penetration (premiums/GDP), size of the economy, and population size, among others. The result produced by this approach is an indicator that allows each market to be ranked on the basis of its potential contribution to closing of the global insurance gap. In order achieve a high ranking, a market needs to be large in size (measured in terms of GDP), and the country must have a significant capacity to close its own insurance gap.

The report also stresses that there are some countries that have ample capacity to close their own gap, but because they have relatively little economic weight in global terms, they will end up relatively low in the ranking. The report places great emphasis on this group of markets, because given their level of convergence towards the established benchmark values, they represent a future source of insurance potential. For example, Pakistan, Egypt and Bangladesh are three countries that, in the next few years, could be contenders for taking over Top 10 positions in the Life segment currently occupied by other emerging markets. In the Non-Life segment, Bangladesh, Pakistan, Iran, Egypt and Nigeria (in that order) have been identified as countries with enormous capacity to reduce their domestic insurance gaps, and if they continue to show growth, they will have long-term possibilities for overtaking other emerging markets in terms of the insurance potential index.