The key to saving lives in case of cardiac arrest: Knowing how to act

If someone were to suffer a cardiac arrest right in front of you, would you know what to do? Studies show that between 74 and 94 percent of non-traumatic deaths that occur during sports are due to cardiovascular causes. And yet there is still a great lack of knowledge about what to do while waiting for emergency services.

Not too long ago, Danish soccer player Christian Eriksen’s heart suddenly stopped beating during a Euro 2020 match. Fortunately, Eriksen was able to be resuscitated on the pitch itself before being transferred to a hospital, where he was promptly stabilized. Eriksen’s life may have been saved, but so many other athletes are not so lucky. The incident received much publicity and media attention, reigniting the discussion around the need to educate the general public on how to act in the event of a cardiorespiratory arrest.

So that everyone knows what to do from an early age, one thing needs to be clear: The key is to act as quickly as possible. “If all citizens how to perform CPR (cardiopulmonary resuscitation), so many deaths could be prevented,” explained Antonio Guzmán, Director of the Fundación MAPFRE Health Promotion Area.

That’s why Fundación MAPFRE and CERCP (Consejo Español de Reanimación Cardiopulmonar — the Spanish Cardiopulmonary Resuscitation Council), in collaboration with the COLEF Council (Spain’s General Council for Physical and Sports Education), have developed an educational program—Learning together to save lives—focused on teaching CPR to both students and faculty. This program is designed for students between the ages of 10 and 17. It was conceived in such a way that it could be incorporated into the curriculum and so as to approach the subject from a transversal, skills-based approach. Training from an early age is the best way to build a society that can recognize and cope with emergency situations involving a cardiorespiratory arrest. 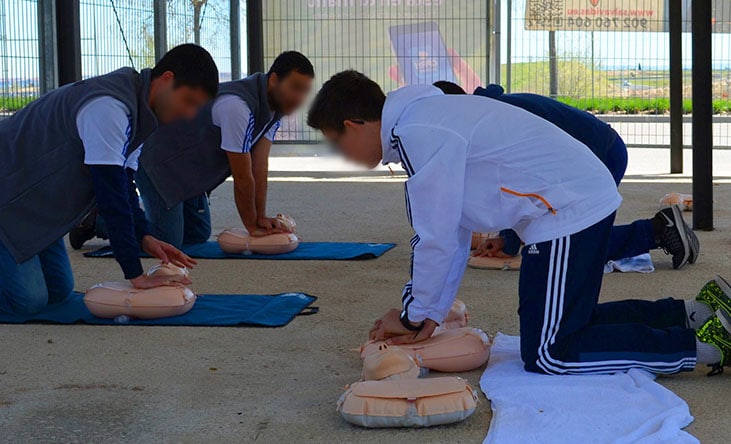 It’s not just elite athletes who are at risk

A study published in the REC (Revista Española de Cardiología — Spanish Journal of Cardiology) concluded that 96 percent of sports-related sudden deaths occurred in the context of recreational sports. The most common cause of these sudden deaths (63 percent) was ischemic heart disease, i.e. myocardial infarction or angina.

In Spain alone, the SEC (Sociedad Española de Cardiología — the Spanish Society of Cardiology) reports about 120 fatalities per year. In addition, 90 percent of cases affect middle-aged men; women are more protected against heart failure by the hormones secreted prior to menopause. The greatest risk is among soccer players under the age of 35 and cyclists and runners over the age of 39.

Play safe — in amateur sports too

Nowadays, “The most effective prevention measure for sudden death during sports practice is still performing CPR and prompt use of a defibrillator,” explained Antonio Guzmán.

With this in mind, at the end of 2014, Fundación MAPFRE and Ripoll y de Prado Sport Clinic, a FIFA Medical Centre of Excellence, launched the JUEGA SEGURO [‘Play Safe’] campaign. It is a global initiative aimed at promoting heart health and providing basic training needed for performing CPR in amateur sports.

How to help someone suffering a cardiorespiratory arrest