What causes inflation and how does it affect us?

Inflation is enough to shake the foundations of any economy. It was for good reason that U.S. economist Milton Friedman, winner of the Nobel Prize in Economics, once said, “inflation is the only form of taxation that can be levied without any legislation.” Even Margaret Thatcher once described it as “the parent of unemployment and the unseen robber of those who have saved.”

Inflation, which has reached historical highs, refers to the cost of living and is a barometer that determines actions with strong implications for the economy, which are becoming even more aggravated against the backdrop of the geopolitical crisis. So, these types of statements ring true. And the ultimate consequence of rising prices is that consumers pay more, which can erode business’ results. But, as seen in the latest meetings of the central banks, this situation also alters monetary policy, which plays an essential role in keeping recovery on track and allowing the most indebted countries to continue paying low interest rates on the money they borrow in the markets.

At this time, prices are soaring on both sides of the Atlantic, and due to the war in Ukraine, the upward trend will surely continue. According to the latest data from Eurostat, year-on-year inflation in the Eurozone was 5.8% in February, seven-tenths above the increase observed in January, which represents the steepest price increase in the euro region in the entire historical series. In the United States, the Bureau of Labor Statistics reported that inflation rose to 7.5% in January, half a point above its level in December, the highest since 1982. And in Spain, it also stood at 7.4% in February, its highest rate in 33 years. 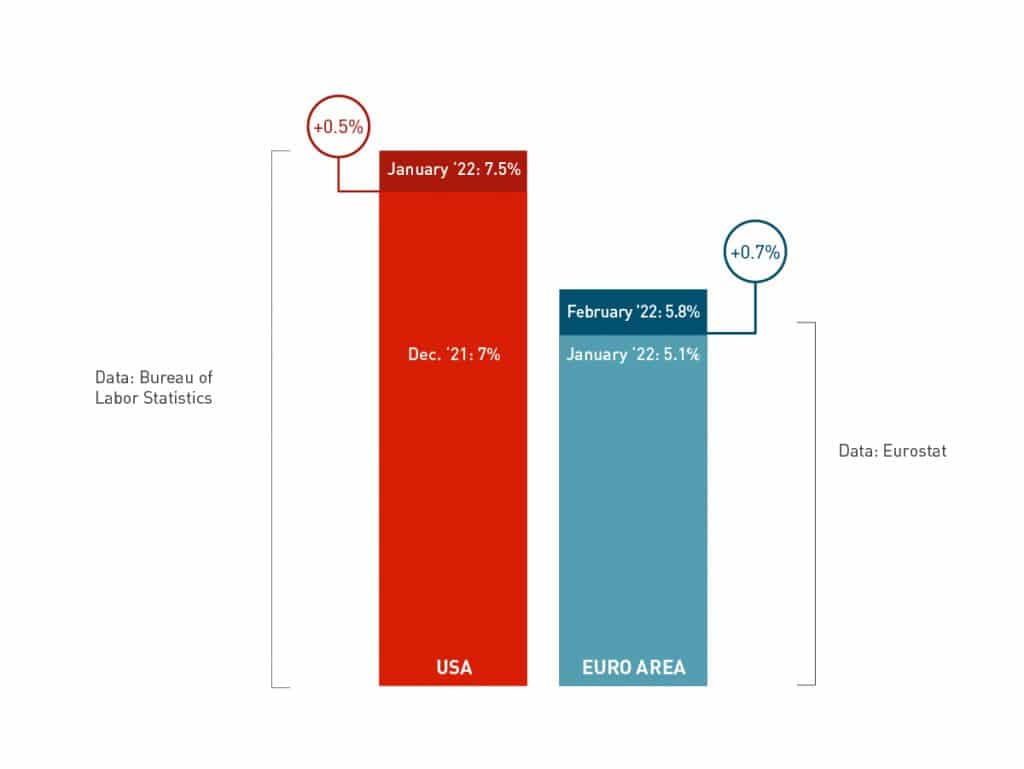 Until now, despite shattering long statistical records, this data had not set off all the alarm bells. This was because some of the factors causing these spikes were purely short-term (besides the fact that what statisticians call the ‘base effect’ was taking place), convincing many experts that these levels could be temporary. But this outlook has radically changed, and that camp has been all but abandoned as a consequence of the war.

People are even starting to talk about the possibility of stagflation, that is, a scenario of greater price pressure and economic stagnation or even recession. “The short-term rebound in commodities, coupled with new displacements in global transport as a result of geopolitical dynamics, would prolong the persistent effects on global inflation, altering the outlook for a peak in inflation throughout 2022 and postponing the forecast of inflation rates staying within the central banks’ band in the medium term,” adds Gonzalo de Cadenas-Santiago, executive director of MAPFRE Economics. Funcas, with MAPFRE Economics participating on its panel, calculated last week that prices in Spain could skyrocket by 6.5% on average this year, almost two points above its pre-conflict forecast, but events are developing so quickly that this estimate may have fallen short. If these forecasts are confirmed, household purchasing power would be severely impacted, causing the recovery of private consumption to stagnate with a very significant impact on growth.

This inflation, which originally arose from a transitory shock in energy and transport costs, persistently changes relative prices and puts pressure on nominal revisions, such as salaries or pre-established prices (for example, rents). This would trigger what are known in economic circles as “second-round effects,” starting that unwelcome vicious circle of inflation. “These and other factors suggest that we will face structurally higher inflation after the current upturn,” explains De Cadenas-Santiago. However, in this current environment of conflict, the expert believes that measures will be taken from the regulatory standpoint to make this happen.

MAPFRE Economic Research adds that, even prior to war breaking out, energy prices seemed likely to climb persistently over time, whether through the green transition and the internalization of production externalities, or the search (always deficient at the outset) for new energy sources, which will be expensive, at least in the short term. “This is especially worrisome in Europe, which is heavily dependent on both energy and raw materials that make possible a green alternative (lithium, rhodium, rare earths, etc), given that it is hemmed in by geopolitics at all its cardinal points. At the same time, the region is held captive by commitments that are sometimes hard to justify (such as nuclear power in Germany).” This is again compounded by the problems arising from supply chains, which are being aggravated by the semiconductor crisis and the high dependence on China. 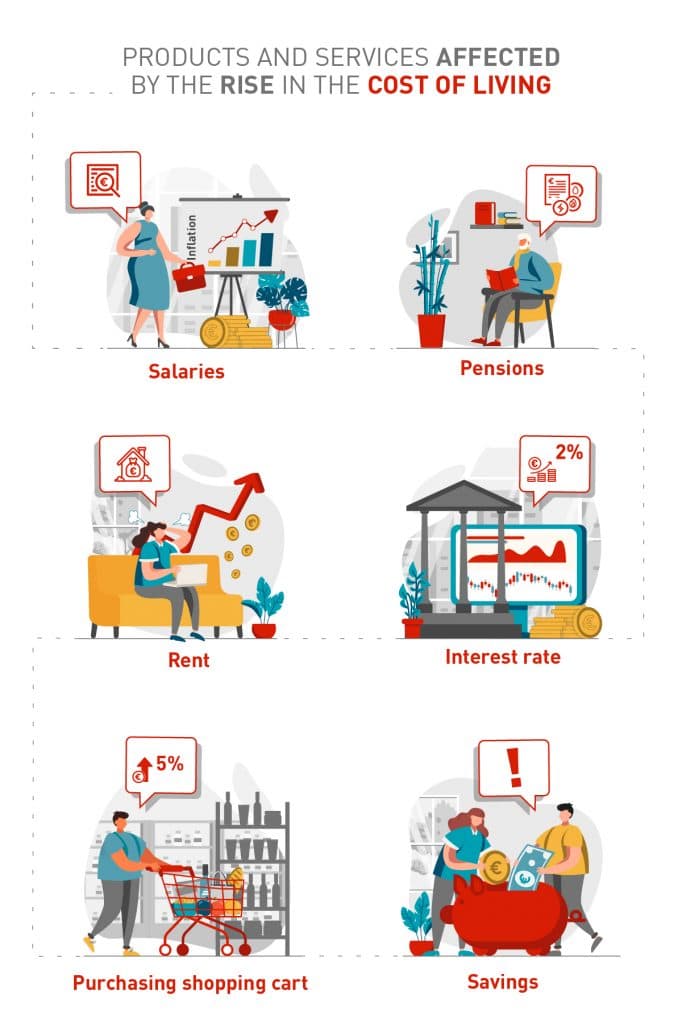 But why are energy prices so decisive in determining the evolution of inflation? To calculate the CPI, a selection of products and services is made that resembles an average household’s consumption. Electricity has a weight of almost 3% in the CPI basket, and yet it has skyrocketed to the point that in 2021 it was responsible for nearly half of all inflation. In addition, the new highs reached by gas and oil due to the geopolitical conflict have not yet been transferred. In short, these prices, which have been extremely volatile in recent months, can determine key decisions that end up affecting citizens as follows. Below is a list of the consequences of the rising cost of living: