As a teenager, Priscila Hernández (dancer and choreographer) decided to pursue a career in classical ballet, and she went on to become a ballerina with the National Dance Company of Mexico. Years later, with the support of her person of trust (her partner, Juan), she took a major step: she left her job to fulfill her dream of becoming a film choreographer, focusing on improving the working conditions of other performers. She also aims to raise cultural standards in Mexico. Throughout our interview, her vitality and enthusiasm reflect the fact that nothing can stop her from giving the best of herself and her team to top filmmakers like Sam Mendes and Alejandro González Iñárritu. When she is old, she sees herself with Juan, her red thread, in the forest dancing–always dancing–to the rhythm of the music they share. Unstoppable and accompanied, just like the other stars of our campaign We trust you. Do you?

First of all, we want to ask you about your great supporter, that person who has helped you make your dreams come true.

I’ve always had a very organic relationship with Juan. Ever since we met, since his dad had been a mime and a dancer, and mine was a musician, we’ve been intertwined from our roots. Quite simply, that helped us understand the universes we each came from, aside from the fact that our professions and sensibilities are closely related. Although we’re essentially very different people, we connected on an artistic and spiritual level. And then there’s his energy. Juan is an extremely positive person. I tend to be more intense with some things, he is with others… He encourages me, supports me and is always there for me, as I am for him. We figure things out together.

Has there ever been a time when his support has been essential to you? Tell us about a moment that symbolizes the role he has played in helping you to fully develop your career.

When I left the National Dance Company, he was there for me. He never doubted me. He really admired the fact that I didn’t stop, how I left and the next day I was already talking to all the ballet schools about teaching. This career is complicated, because you work with different teams and production companies. Every director and every situation is different, and he’s very calm and level-headed when evaluating everything that goes along with it.

What inspired you to change direction and move into a different field?

I think it was a very basic need for me to seek better conditions for dancers. That was what motivated me. I wanted to be a liaison to help dancers get more work, to seek fair and dignified treatment, and when I started doing that, I realized that they were not respected. They weren’t treated as well, like mere extras, with miserable pay, very unfair treatment considering that dancers are both athletes and performers. I had just spent a long time studying for my degree in Cuba, eight years, and I thought: the way these performers are treated seems so unbalanced. That’s where I started, and that’s why it went well for me, because my intention was the common good. I’ve always believed that when you think about helping others and not just yourself, things will go well for you. Obviously, I was also thinking about how I could help my clients and do high-quality work in Mexico. That was important to me: we’re a country with a tremendous amount of culture, with extremely talented people who have managed to do highly innovative things, and I wanted to raise the standards surrounding that. We were ready for that.

Having clear goals—in your case, working in film—is important in fulfilling your dreams. Do you have any other tips or strengths that you can highlight, and that reinforce trust for you?

Well, for example, I believe that as parents we have a lot of responsibility towards our kids. In my case, my parents always supported me. There are people who have benefitted from the exact opposite, because it made them fighters. But if you don’t have that strength, and your dad says, no, you can’t do that or you’re not good enough, fifty percent of people won’t succeed, because they lack that fighting spirit. People used to tell me: “Come on, how are you going to be a dancer?” I had a few frustrated teachers… If they’d caught me on a bad day, I might have believed them and never danced. We don’t all have that grit, that instinct. As parents, it’s important for us to fully support our children in whatever they want to do. After that, there’s hard work. They’re not necessarily going to be more successful by studying medicine. It’s important to find out what your children enjoy and to support them. There is another part that seems important to me, that has to do with spirituality. When I started out, I was very into Mexicanity and the wisdom of my ancestors, as well as Buddhism. And I was open to learning and understanding that you are ultimately responsible for everything that happens to you, and that you’re not a victim. For better or for worse, you are responsible. I have that spirituality and that trust that things are going to turn out well. If you think they won’t, you become a victim, and you’re not being self-critical when it comes to making decisions. You need to know how to say, I screwed up, I made a mistake, this won’t happen to me again. I’m going to work on it and not blame anyone else. Success requires hard work and lots of self-criticism.

What’s the best advice that anyone has given you for reaching your goals? And what advice would you give another person who is just starting out, for example?

What I like to say is, trust your heart above all else. What do you like to do? What moves you? What gives you butterflies in your stomach? Listen to that closely, and pay less attention to your head. And then, like I was saying, be the best that you can be. And be very self-critical.
The advice I would have liked to receive, for example, is not to compare myself to others and not to be a victim, so that instead of looking on the outside, I would find answers on the inside. So they gave that role to that dancer? But I’m better, I have a better instep… If you stop and look in the mirror, you’ll know why you didn’t get the role: because you didn’t work hard enough.

I would have wasted a little less time. Why wasn’t I getting those roles? Why wasn’t I receiving that recognition? -Because I hadn’t worked as hard as I should have. I may love dancing, but it might not be my goal to be the prima ballerina at the National Dance Company, and that’s why I don’t get those roles. 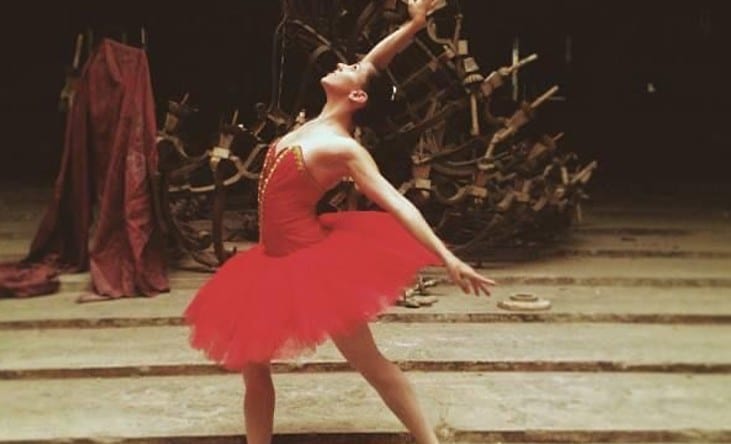 Sam Mendes—awarded for his debut film, American Beauty, acclaimed for his theatrical work and director of the latest releases in the James Bond franchise—and Alejandro González Iñárritu—winner of four Oscars for films like Birdman and Amores Perros—are two of the directors you have been lucky enough to work with. What would you highlight about their way of doing things? What is leadership to you, and what does it generate in others?

I was just talking about that with Juan in the car. What will I remember about Iñárritu? When I think about how he conceived his work, he sought to materialize his emotions with high standards; and he challenged you to work on a level that you didn’t know you were capable of. Working with him was an incredible learning experience for me. He seemed to think, you gave me 100%, I want 120%, and now I want 140%. Do you like it this way? It can be even better. He saw what we were capable of. I greatly admire his perfection and his sensitivity, because even though he wasn’t a dancer or choreographer, he would notice things that I thoroughly appreciate, and I would think… How did Alejandro notice that? He has that ability to see everything. He would propose things to me, and I’d have to solve them. That was his level of perfectionism, and it affected the rug, the wall, the silk, everything. That’s so enriching to me as an artist, and it helped my whole team to grow. Now we’re in another production, making a musical. We’ve choreographed 100 dances, it’s crazy, but we did it. Obviously, I brought the same team with me. And I found Sam Mendes to be a highly sensitive person, so connected to art and dance. He knew exactly what he wanted and what he didn’t. I didn’t spend as much time with him as I did with Alejandro, I only did the parade scene. But the whole creative process was rich, because I worked with him directly and we came up with ideas together and had a great time. It was pure laughter, with his English humor… In both cases, we did a lot of groundwork before we could enjoy it, because that was precisely what concerned me the most: getting there and being able to enjoy it, not worrying about something not happening or not going well… During the pandemic, instead of stopping, my team and I did more and more things together, more choreographic exercises, even though no one was asking me for anything! And then, when the time came to work with Alejandro, we were ready.

Tell us about that movie and about your latest projects.

It hasn’t premiered yet, I just read that it will be called Bardo. We started this year, and we’ve already finished our scenes. And what we’re filming now is a musical directed by Santiago Limón. Making a musical is quite a challenge, now we’re in the middle of this journey, which ends in December.

I get the feeling that you’re one of those people who always fulfills her dreams. Do you have any director in mind that you’d like to work with?

One of my dreams is to work with Álex de la Iglesia. I really like what he does, I always have. It’s all humor, and I find his work hilarious; he’s one of my favorite directors, so I hope he reads this. But obviously there are others. There’s no rush… There are many connections…

What is the relationship between dance and film? How does dance move the film itself? Tell us about these two worlds that you’ve managed to unite, also to give other dancers more dignity and opportunities.

Ultimately, dance is a highly visual art. An image can tell you so many things. If one of those giants who write incredible scripts invites me to be part of that language, I find it extraordinary. I like to understand the why of the stories, where they come from, not just the aesthetic result. I like that union with the movement and getting to the root of that movement. What is it telling you, what does the film aim to transmit? What visual figure can you create? All that moves me. I remember the first time I saw West Side Story. I said, wow… I can’t believe this was made so long ago and it’s still up to date, that the steps are so incredible, and that vitality… I think film is a great platform for portraying dance. How many films are there without dance? Nearly all movies have it. In fact, I find it strange that there’s no Oscar for best choreographer. Later it was explained to me that perhaps there was some kind of dispute over the audience, which was why they didn’t want to give their space to choreographers. Theater is sacred too, incredible, but it has another way of telling stories.