Wheel the World, the initiative that makes tourism accessible to all

A finalist of the Fundación MAPFRE Social Innovation Awards. It uses technology to gather accurate accessibility information about tourist destinations and adapts offers to the needs of each user. More than 500 million people avoid traveling due to a lack of accessibility information. The final of the fourth Fundación MAPFRE Social Innovation Awards will be held on May 12.

Wheel The World is a platform that enables travelers with disabilities to find and book fully accessible travel experiences. For Álvaro Silberstein, CEO and co-founder of this initiative, giving people with disabilities the opportunity to explore the world as he always has is a top priority. After a car accident at the age of 18 left him unable to walk, Silberstein joined forces with his friend and co-founder of Wheel the World, Camilo Navarro, and resolved not to let anything stand in the way of his dream: to do the Torres del Paine route, in Patagonia. “We realized that no one had followed the route in a wheelchair before, but that with a special all-terrain wheelchair and the right information it could be done.” After he completed the trip, his story went viral and hundreds of people with disabilities became interested in following in his trail. Wheel The World was then launched to encourage others to explore without limits.

Wheel the World is an online platform where users can find and book tourist services that have the accessibility features they need based on their profile. Travelers can search for destinations, hotels, tours or packages adapted to their specific needs. Once a booking is made, the platform provides the hotel or tour operator with all the details necessary for those needs to be met. The Chilean project also uses a mapping system to collect highly specific information. “By using detailed forms and generating photo content, we are creating a tourism accessibility database that is unlike anything else in the world.”

“People with disabilities and their carers are faced with a number of difficulties when booking a trip that meets their accessibility requirements. This lack of information is preventing more than 500 million people worldwide from traveling.” The accessible travel market is one of the largest market niches in the industry, yet it is the most neglected segment. According to the World Health Organization, more than 1 billion people worldwide have a disability and, in the coming years, an estimated 25 percent of all tourism will be made up of persons over the age of 65 who have special mobility needs, a reality that will become more significant as the world’s population ages.

Wheel The World has accompanied over 1,000 travelers, with and without disabilities, along more than 110 accessible travel routes in 35 destinations around the world. Their goal is to support another 700 people on trips throughout 2021. Whether it’s relaxing on a Mexican beach with a beach wheelchair, journeying through the Chilean mountains, going for a dive in the most spectacular reefs or even surfing, nothing is impossible. 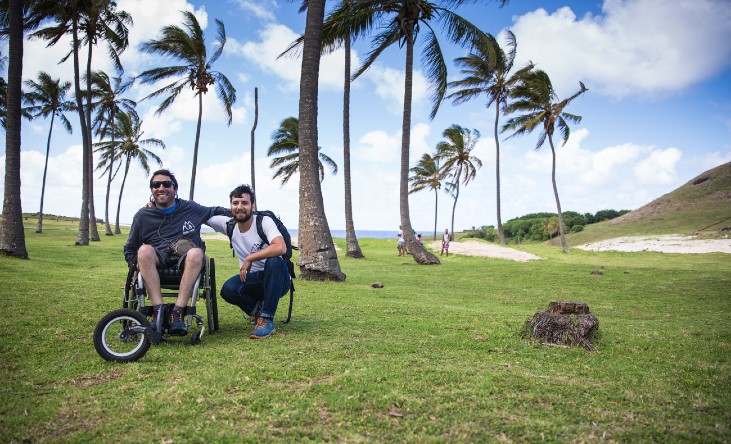 Awards for a better world

The fourth edition of the competition attracted more than 300 initiatives created by scientists, researchers, and university and business school students — 28 percent more entries than in the previous edition.

Designed as a contest across three geographical regions—Brazil, the rest of LATAM and Europe—the aim of the Fundación MAPFRE Social Innovation Awards is to back the development of proposals that capture the essence of social innovation, skill, transformative capacity, commitment and the need to improve the world around us.

On May 12, a panel of experts from Fundación MAPFRE and IE University, an academic partner of the Awards, will choose the winners. There will be three winners in total, one per category, relating to three very topical and influential areas that are also the focus of the work carried out by Fundación MAPFRE: improving e-health, accident prevention and safe and sustainable mobility, and the economics of aging (Ageingnomics).