Closing the gap in technology and science: how to get more women into STEM careers

Despite continual progress, there’s still a large gap between men and women in both technology and engineering degree programs and technical research careers.

A recent study by the United Nations (UN) highlighted the low representation of women in scientific research, at less than 30 percent.

This figure illustrates the inequality that exists in STEM careers, i.e. those related to science, technology, engineering and mathematics. What’s more, this is not only the case in less developed countries or those where women don’t have the same opportunities—or even rights—as men. It is also true in the world’s most advanced nations, such as the United States and those that comprise the European Union.

Why is the lack of women in STEM careers a problem?

The UN data simply expresses in numbers a reality that has been present for some time, despite ongoing efforts to reduce this gap.

The fact that women don’t have more representation in the scientific research sector or in STEM-related professions leads to several problems that require solving:

If women, who make up more than 50 percent of students in many countries, continue to “turn their backs” on these studies, not only will the situation not improve, but many business opportunities will be lost. This is reflected in the report Women, Business and the Law, prepared by the World Bank, which states that productivity could increase by 25 percent in some economies if the barriers that prevent women from accessing certain sectors were eliminated.

In addition, these gaps cause a loss of 160 trillion dollars per year. And that’s not all. McKinsey & Company compiled a study that evaluated 345 companies across six Latin American countries, and showed that those companies whose executive management committee included one or more women achieved 44 percent higher performance than those that lacked any female leaders. Despite this, only 19 percent of the companies evaluated met this criterion. 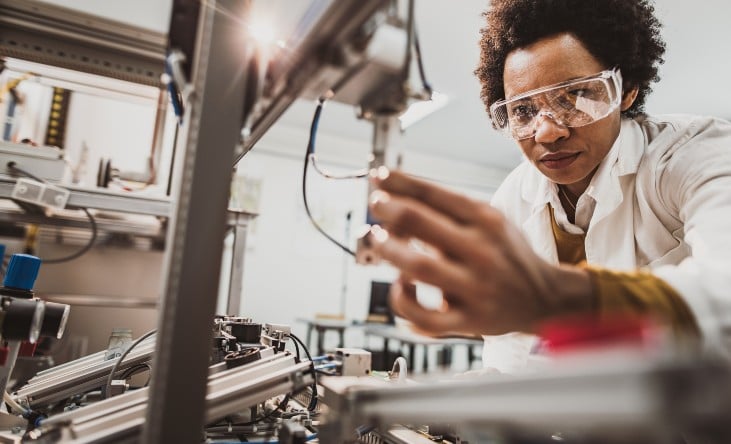 Optimistic figures on including women in science and technology careers

While each country must reflect deeply on the results of these various studies, it is worth noting that some of the figures highlighted do show progress that should rightly be celebrated.

The UNESCO Institute for Statistics recently published that in July 2019, 27 percent of countries had reached gender parity among researchers, meaning that 45 to 55 percent of researchers were women (though it is important to keep in mind that many of these women still face the infamous “glass ceiling”). In this regard, according to the UN, one of the areas with the greatest parity is Latin America and the Caribbean.

Initiatives to close the gender gap in STEM careers

All kinds of initiatives are being implemented to turn around this seemingly deeply embedded situation, although there’s no doubt that this is a difficult task.

Perhaps the most important of all is the search for and the existence of role models in sectors where women haven’t been represented or, even worse, where they’ve been pushed to the sidelines. Many specialists believe that with a greater effort to raise awareness of female figures in STEM careers, girls and adolescents will see such figures as role models and will tend to pursue this type of education. This would encourage women to move away from the tendency to work primarily in professions related to health and care-giving, where they are in the majority.

In this sense, the Association of Women in Research and Technology (in Spanish, Asociación de Mujeres Investigadoras y Tecnólogas — AMIT), supported by the European Parliament Office in Spain, launched a campaign in January 2021 that exemplifies this action area perfectly. The name of the campaign is #NoMoreMatildas and its goal is for school textbooks to highlight women scientists who have been forgotten despite their historic achievements.

This summer in Spain, there will also be a training program whose name in Spanish says it all: #ChicasImparables (#UnstoppableWomen). Aimed at 16 and 17 year olds, it will focus on creating group projects in which entrepreneurship, finance, communication and digital marketing will be especially relevant. The objective is none other than to enhance these young women’s skills and encourage them to take on new competences.

Another good example comes from UN Women, which showcased the work that some women scientists have carried out during the pandemic, both in research and in developing vaccines and treatments that are helping to curb the ongoing coronavirus pandemic.

In short, it’s a matter of approaching the subject from the perspective of a non-stereotyped view, promoting technical training for women and providing equal education in all areas, from schools to the family environment.