María Marte, chef and creator of the María Marte Foundation: The happy chef

She arrived in Spain in the early 2000s in search of a better life. She started washing dishes at El Club Allard and, 13 years later, became the restaurant’s Head Chef, where she retained the two Michelin Stars that the establishment held. A few years later, she decided to leave everything behind and return to her country, the Dominican Republic, to fulfill new dreams closer to her family. María Marte’s life is a story of self-improvement and sacrifice, not to mention hard work. Nevertheless, there is always a smile on her face, which is why in the culinary world she is known as “the happy chef.” 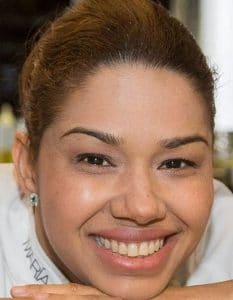 She defines herself as a fighter, a foodie and a mother of three. María Marte is originally from Jarabacoa, a small town located in the north of the Dominican Republic. That’s where she grew up with her family and began to develop a passion for food. “My passion began at a very early age. I can safely say that my toys were always kitchen tools. I grew up surrounded by good cuisine, as my mother was a pastry chef and my father was a chef in a small restaurant,” María tells us.

Her parents were a source of inspiration for her and her career. From them, she learned that she had to work hard to earn a living. That’s why she decided to leave them behind and move to Spain, where her eldest son lived, in search of a better life. She started washing dishes at El Club Allard and doing other jobs to make ends meet, such as cleaning a hair salon a few hours a week. Once in Spain, she was pleasantly surprised: “I discovered the passion that Spaniards have for food and I realized this was where I was meant to be. Everyone has a destiny and mine was to find myself in the right country and in the right kitchen.”

María was a revolution in the kitchen of El Club Allard, at a time when Diego Guerrero was the restaurant’s Head Chef. She decided to learn from the work of her fellow chefs while continuing with her cleaning duties, until the Head Chef asked management to look for another dishwasher: “You belong in the kitchen,” Guerrero told her. In 2006, three years after she arrived, she became the chef’s right-hand woman.

Not everything was a bed of roses for Marte: “Leaving my children behind in my country was the most difficult decision to make, but they depended on me and I had to create a better future for them. It was the saddest part of this story,” she explains. Still, her efforts were worth it. “In all honesty I never thought I would achieve this much, let alone become so big in the culinary world. What was clear to me was that I wasn’t going to spend my life washing dishes,” she clarifies.

“Leaving my children behind in my country was the most difficult decision to make, but they depended on me. It was the saddest part of this story.”

And so, she was right. In 2013, after Diego Guerrero left El Club Allard, María became the restaurant’s Head Chef, and her first task was to retain the two Michelin Stars that the establishment held. She achieved this in 2014 with a cuisine that “reflects joy and always shows respect for produce.” That was when she realized that her efforts and her decision to leave her country behind had all been worth it: “I never regret the decision I made; quite the contrary, actually. I feel great about it. It was the right decision. I consider myself a very brave woman,” she says.

“Our cuisine is very flavorful. The only thing missing here is creativity in the kitchen — and that’s my world.”

Creativity has always been the guiding principle of María Marte’s cuisine. All without “masking the produce” of course. Her first dish, “Flor de Hibiscus” (hibiscus flower), brought her success and recognition in the culinary world. So much so that she has an image of it tattooed on both sides of her hips. In 2015, she won the National Gastronomy Award for Best Head Chef 2015 from La Real Academia de Gastronomía de España (the Royal Spanish Academy of Gastronomy) and the Cofradía de la Buena Mesa (the Guild of Fine Dining).

These are not the only awards that the Chef holds: Two Ms in the Guía Metrópoli (2010), two Repsol Suns (2011), the Metrópoli award for Restaurant of the Year (2012), Travelers’ Choice Award (2012), Mahou-Millesime award for Best Restaurant of the Year (2012), Club de Gourmets Best Chef Award (2015), Award from the Dominican Ministry of Tourism and National Association of Hotels and Restaurants (Asonahores) at the International Tourism Fair (2015), Star from the Community of Madrid on International Women’s Day as a reward for effort and dedication (2015), 2014 National Gastronomy Award for Best Head Chef (2015), 2017 Mujeres a Seguir (women to watch) award, 2018 Woman Award and 2018 Optimista Comprometida con la Cultura Award (optimist committed to culture award) given by the magazine Anoche Tuve un Sueño.

However, everything changed when her daughter suffered facial paralysis that, thankfully, was not as severe as it could have been. Her professional life and family life were no longer compatible, and the chef struggled to balance the two. That’s when she decided to leave El Club Allard’s kitchen and return to her country to fulfill another one of her dreams. “In 2018 I made the decision to leave Spain and return to my country to embark on a new project. I can safely say that all my dreams are coming true and going very well. I have my own foundation, the María Marte Foundation, where I provide aid to people with different needs. I also founded my own private-event company. It’s not easy, but I’m very happy doing what I do. And, most importantly, I continue to work on my biggest passion: good food,” she tells us. 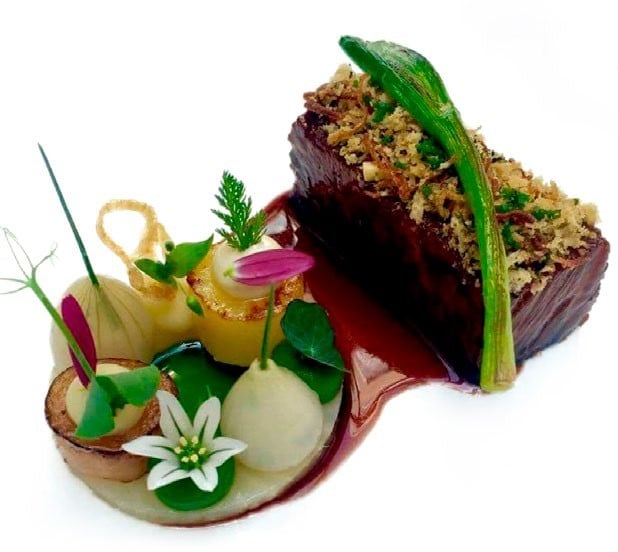 What’s more, she returned to her country with a specific goal: to reinvent Dominican cuisine. She set herself quite the challenge. “Our cuisine is very flavorful. The only thing missing here is creativity in the kitchen — and that’s my world.” I’m succeeding in achieving this, as all my projects go hand in hand with this type of cuisine. Whenever I have an event, every bite screams “made in the Dominican Republic.”

Among her dreams, she has envisioned a project for the recovery of endangered plants, but “it’s still in the early stages.” She has put it on the back burner for now, but it’s always in the back of her mind. She has other dreams too, which she confirms with a dashing smile that is oh-so familiar to the culinary world: “I’m someone who will never stop dreaming, but who, above all, will fight for those dreams. I dream of a better world and of being a better person every single day.” This is María Marte, the chef with the infinite smile.