Patricia Fernández: “We must act now and create crops that are resistant to diseases that will accompany climate change”

In recent years, the European Union has banned the use of some pesticides due to them being harmful to human health, killing insects and polluting the environment. However, pesticides are also necessary for pest control and crop growth and, therefore, for food production and food safety. To tackle this problem, biopesticides are a natural or organic alternative to chemicals. The global biopesticide market is expected to exceed USD 3.3 billion by 2026.

In this context of increasingly more products developed from natural substances, work such as that carried out by biotechnologist Patricia Fernández Calvo, a researcher at the Center for Plant Biotechnology and Genomics of the Polytechnic University of Madrid (CBGP), are seeking to find new alternatives that are less harmful to our planet’s health. With a passion for the molecular biology of plants, her research focuses on the immune system of plants to find out how it works and what substances increase its strength. This project, which aimed to identify bioprotectors and biostimulants in plants, won her an award from the L’OREAL-UNESCO for Women in Science program in 2019.

“We identify sugar-type biomolecules from the plant itself that help it to strengthen its own defenses against fungi, which we can then use as insecticides on crops, thereby avoiding the use of external chemicals. We also study the molecular mechanisms by which these compounds protect the plant,” explains the researcher. To do this, they modify the genes of the plant (of the species called arabidopsis, a weed widely used in research), so that they produce more or fewer compounds and then extract them to produce and apply them in the field.

“We have a battery of identified compounds that activate the immune system and we’re now conducting tests in greenhouses to see if they also work outside of laboratory conditions.” For now, the CBGP team of researchers has found that it is effective in tomatoes and bell peppers. Their next step will be to examine whether the same is true for wheat in a groundbreaking study.

“Although many have already been banned, some pesticides available on the market have been proven to build up in human tissues. No matter how much you wash the fruit or vegetables, they enter the plant itself and are ingested when you eat them. What’s more, pesticide chemicals also pollute soils and aquifers, so it’s a vicious circle where you want higher production but at the cost of contaminating both soil and aquifers, and yourself,” says the researcher. 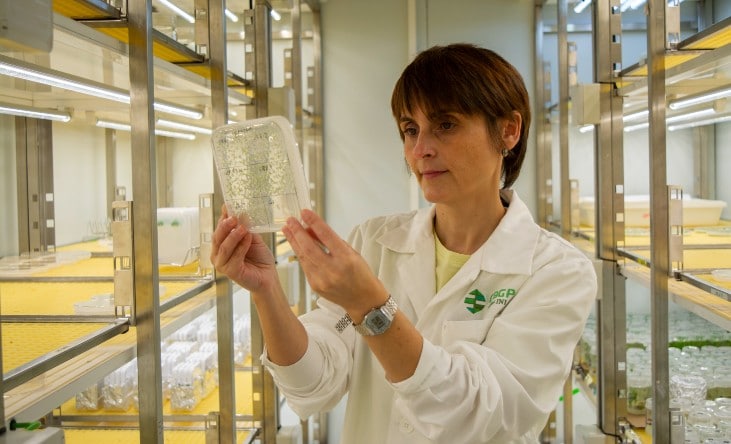 The expert explains that understanding the processes of plants’ immune systems not only results in more resistant crops, but it also increases the productivity of crops, which helps to solve the issue of vegetable supply for animal and human food. The United Nations Food and Agriculture Organization (FAO) estimates that, “to meet demand in 2050, agriculture will have to produce almost 50 percent more food, fodder and biofuel than it produced in 2012,” warns the report “The future of food and agriculture.”

“Many of the compounds that we have identified are biostimulants, as we have seen that they not only improve the immune system, but they also allow plants to grow to be more vigorous, and this is another part of the research that we are trying to understand. These factors tend to go hand-in-hand: the more you are able to defend yourself, the more successfully you will grow. So they could be used as fertilizers,” emphasizes the molecular biologist.

Another aim of this research is to get ahead of the effects of climate change. “As the global temperature increases, environmental pathogens multiply, especially fungi. It is essential that we get ahead of this and create crops capable of resisting diseases that will accompany the increase in global temperature,” she stresses. The researcher advocates for the use of transgenic organisms in order to face future challenges, such as desertification. Patricia Fernández Calvo argues that this process of degradation will be accompanied by the mass movement of people to more temperate zones in the search for food. “Climate change should be addressed globally, so that all countries agree to row in the same direction but, unfortunately, I see that this is not the case,” laments the researcher.

The expert in plant immunity predicts two fatal consequences of temperature increases: soil impoverishment due to lack of water and a proliferation of fungi that infect crops. “All research into generating crops that don’t need as much water and that can even grow in hydroponic conditions where you don’t need soil, is very important. Due to the rate at which the human population is growing, we won’t have enough land to provide food for everyone. Then, the solution will lie in transgenic organisms and in optimizing cultivation conditions. We’re working in laboratories to find important answers to this, to crops with fewer exogenous demands (water, land, nutrients etc.), because we’re trying to improve them from within, at the gene level.”

Patricia Fernández Calvo defends genetic or transgenic editing techniques, because genetically modified plants undergo more controls than any other food or treatment in the field. “They pose no danger to human health, the only danger they could pose is becoming an invasive species, but that isn’t likely to happen either because we generally make laboratory transgenic organisms sterile so that they will not be able to cross with other plants. They live for one generation and then they die, they leave their seeds and that’s it. It’s controlled,” she explains.

In addition to eliminating the use of pesticides, responding to many problems brought about by climate change and being able to better feed the population, the biotechnologist also hopes that better understanding plant immunity will provide answers to problems related to the human immune system. The CBGP team is therefore developing a series of technologies that it wants to use to verify whether the protective role of sugars has the same effect in animals. This work will also allow them to confirm whether there is any poisonous effect in other types of cells or systems. “This check is necessary in order to produce a transgenic plant that can be marketed.”