Only a few continue to doubt that the world is experiencing a climate change accelerated by human actions. Temperatures have risen over the past century, and there is a threat that they will continue to do so throughout the 21st century.

This has led countries and supranational institutions to take and promote measures that in some way put a stop to the emission of greenhouse gases, as well as other sources of environmental pollution. Failure to do so could lead to catastrophic consequences at all levels, including for world heritage.

According to a study by UNESCO, UNEP (United Nations Environment Program) and the Union of Concerned Scientists (UCS), climate change is one of the most significant risks to World Heritage sites and monuments.

World Heritage and Tourism in a Changing Climate

This is the title of a report in which these organizations outline the current situation and warn that not only nature and humans are suffering under the climate fluctuations, but their creations are also subject to deterioration and, in some cases, even disappearing.

Rising sea levels, droughts, fires, acid rain… The list of circumstances attacking world heritage assets is as long as it is difficult to manage, as there is still nothing that can be done to prevent the most extreme weather phenomena. In fact, the only remedy that can be undertaken is the one that is already being adopted: reducing greenhouse gas emissions and caring for the environment.

Of course, there is also the individual option of caring for and protecting each of the assets in danger. The same report also highlights that there are 31 affected sites in 29 countries, nearly all well known worldwide, contributing not only cultural heritage, but also acting as a significant source of local revenue and development. Anyone who has visited Venice or Stonehenge—two of the affected sites—will have seen the importance of tourism for the local economy. 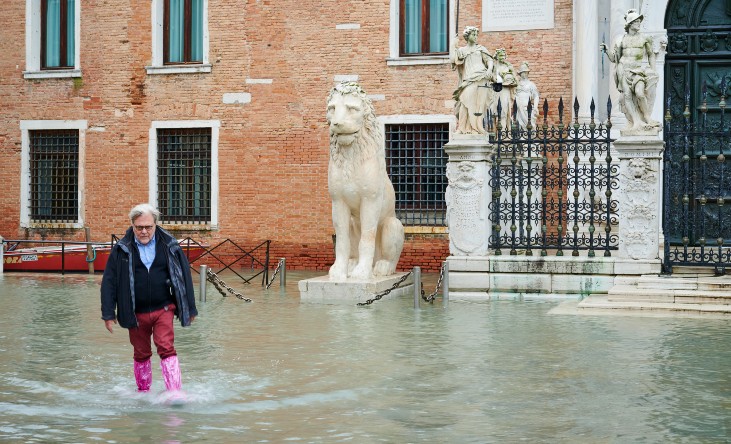 However, the report simply reinforces what the scientific community has been warning about for some time. For example, a 2016 article in Spanish daily newspaper El Mundo already mentioned that acid rain was affecting a number of statues and buildings around the world. The findings of Elisabetta Erba, researcher and professor in the Department of Earth Sciences at the University of Milan, point to the fact that “acid rain especially affects marble and other limestones, which it gradually destroys, dissolving it. We are already seeing heavily damaged statues due to this rain. Unless something is done, in 20 years many buildings, sculptures and fountains adorning our squares could be significantly deteriorated. The only solution for protecting them would be to cover them.”

These words are not just the researcher’s conjectures, rather they refer to statues that in just 60 years have lost their “faces” due to the effects of acid rain. Climate change has led to variations in the composition of the atmosphere, and although they do not affect humans directly, they do have an effect on materials such as marble and limestone.

As indicated above, the world’s cultural heritage assets have a positive impact on local economies and well-being, in addition to providing an inspiring historical legacy. For example, it is estimated that in France some 40,000 workers work each day in tourist operations related to monuments and museums.

Another 45,000 workers are responsible for upkeep and maintenance. And then, of course, there are the restaurants, hotels and shops that depend directly on these activities.

The effects of the COVID-19 pandemic have clearly been especially hard on the tourism sector, so the deterioration of monuments and emblematic buildings could have similar consequences for some sites. However, it is not just the economic aspect. That is what Amnesty International says. The organization that highlights that “the climate emergency could undo centuries of humanity’s cultural progress and even keep some cultural practices from being preserved in the future.”

In this post they posit that climate change threatens sites of “cultural interaction” so “it would be wise to take stock of the current and future cultural losses to better understand what is at stake and consider now how to adapt culturally going forward.”

And that’s not all: the organization also points out that many countries are suffering the consequences of excessive pollution—created in large part by other wealthier countries—are incapable of maintaining their cultural assets. That is why global action is needed so that not only the wealthiest economies (which generate a large part of the polluting gases) can tackle this problem, but so that such action is also common to any cultural asset that has been declared part of world heritage.