The 75-year history of a MAPFRE office… Many changes have taken place, but the essence remains the same

Finding a family that has been in the insurance business for 75 years and is now in its third generation is not easy. But one does exist. In Morón de la Frontera (Seville), we found the Albarreal family, who has been linked to MAPFRE for its entire professional career.

In order to learn about the beginning of MAPFRE’s activity in this town, we need to go back to 1946. It was on February 13 of that year when Antonio Albarreal began his professional career as a MAPFRE representative in Morón de la Frontera. Logically, at that time, the first insurance policies being marketed were related to the agricultural world: crop insurance or insurance for machinery—as scarce as it was—to work in the fields. The market share of this office in Morón de la Frontera became unbeatable (it insured all the crops in the municipality). 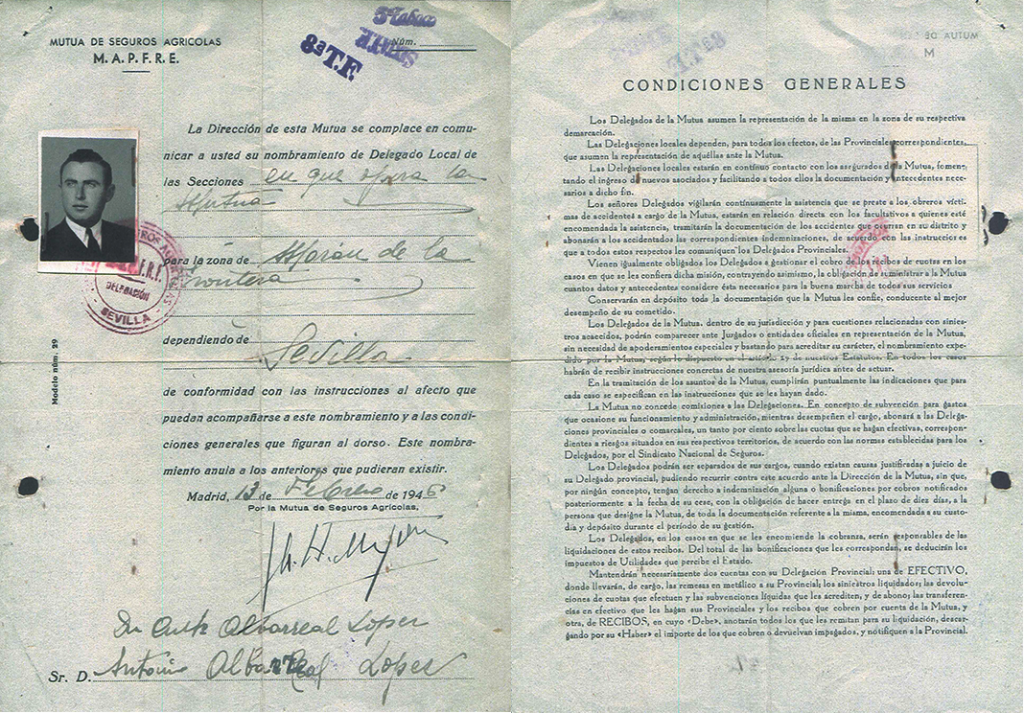 He set up the first office in his house, planting the seed of this branch that would gradually grow into other segments. At first it was only tractors, but with the passing of the first compulsory automobile insurance law in the 1960s, cars were also added to the portfolio. Later, other segments were added: homeowners, commercial and life in the 1970s, to name but a few. In fact, its own slogan from decades ago, “Ask us for any type of insurance, we’re sure to have it,” could still be valid today in this office. Its share of the automobile segment in the town reached 75 percent. Today, of course, this situation has changed due to the increase in competition, the emergence of telephone and low-cost companies, and the importance of price above any other consideration for many clients. But what has not changed for the Albarreal family has been the essence of the business: customer service as a fundamental premise, quality and personalized assistance.

As the business grew, it was necessary to expand the facilities. The first step was to rent a space in an old flour factory in town on calle Utrera — the same street on which the office is still located today. Time has passed and the office has changed location, a few spots further down, but still on the same street. Today it is larger; it has been modernized, but its managers are still the Albarreal family. Today the second and third generation of this family work in this office and directly employ seven people—three of the founder’s children (Antonio, Felipe and Ángel), one of his grandchildren (Isidoro) and three other employees (José Antonio, Noelia and María Angeles)—not to mention the indirect employment generated in the area (vehicle repair shops, plumbers, masons, painters, etc.).

The changes have been very profound in these 75 years, as Ángel, one of the sons of the founder of this local office, recalls: “The communication channels in my father’s time were a typewriter and, at the most, a few phone calls. The business had to go out to the streets; it went to the countryside, the village taverns, the stores. Today all that has changed. It is the client who forces us to adapt our way of working. Face-to-face service in the office has diminished… but we have other ways of interacting with clients. WhatsApp, for example. We’ve also incorporated new forms of payment, such as Bizum.”

Innovation is also at the core of this decades-long history. If the business had not adapted to each new reality that the country experienced, it would not have reached its 75th anniversary. Ángel remembers when the first computer and a dot matrix printer were installed in the office. Until then, typewriters and paper receipts were used to keep a record of his clients, their payments and their claims. There, in that office, bills were paid in cash and, surprisingly, claims in the thousands of pesetas were also paid in cash. Today this is unthinkable. But it was the reality for many years.

The founder’s children remember this, as well as some clients who are over 80 years old; loyal clients who have been the best ambassadors of this office and the best influencers for their children and grandchildren, highlighting what has always characterized MAPFRE: spirit of service and supporting the client at all times.

The changes overs these 75 years have been very significant: the way of interacting with clients or the products marketed are far removed from that of a few years ago, but the essence remains the same. MAPFRE has not changed in this respect: the client is at the center of every single process, no matter how manual they may be.

“We’ve been adapting the business to the times, although we still have a long way to go: the acceleration of change is considerable and means we have to be prepared to keep moving forward,” says Ángel, who recalls how the office has been growing as MAPFRE has been growing.

The Albarreal family office continues to be an icon in Morón and the area, since it serves not only this town but also other nearby municipalities. As recognized by the children of Antonio Albarreal, who was the “true architect of the local office,” although the market share is not the same as it was decades ago, being the trusted insurance company of more than 35 percent of the population is something to be proud of. 75 years being the image of MAPFRE is only the beginning of a long history that will continue for decades to come, as the third generation is already at work in the office to continue perpetuating this legacy.