The pandemic: under the skin 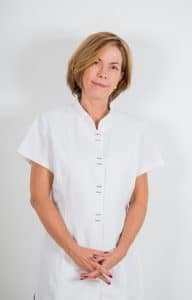 Now with 30 years of experience, García originally wanted to be a computer scientist and biologist. Her family encouraged her to study in Tenerife and she opted for Medicine. Although it was her brother—now a physicist—who seemed destined to take after their dermatologist father, it’s her that eventually followed in his footsteps in the specialty. For more than 20 years, she has been investigating the link between the psyche and the skin, to provide better care for those suffering beyond the initial visible epidermal barrier. That raison d’être—caring for people—is extremely important to MAPFRE. She is proposing a comprehensive research investigation that covers the patient’s quality of life and their levels of depression and anxiety. “A zit is more than just a zit,” she explains.

Question (Q): They say that skin is the window to the brain. During the current situation, have there been more cases?
Answer (A): Many more. Dermatology appointments have increased massively during the pandemic. We were working from home non-stop because patients that already had skin conditions, in particular inflammatory ones such as acne, psoriasis, atopic dermatitis or other forms of eczema, saw them worsen as a result of the crisis — not just because of the stress, but also because many of them stopped their treatment out of fear that it would have side effects on their immune system.

Q: What areas does psychodermatology cover?
A: Dermatology is a very broad discipline and, as the skin is the window to the brain, it really reflects our stress and nervous system. Some dermatologists, including me, are really interested in these aspects and have formed societies and work groups that specialize in the relationship between dermatology and psychiatry in order to expand the existing research. It started many years ago in Germany, and I have been part of work groups since the ’90s. They include the European Society for Dermatology and Psychiatry, the American Society, the Spanish Group, and so on.

Q: When we have a skin condition, does that automatically mean that we have a weakened immune system?
A: There are a number of different skin conditions: infections linked to a potential deficiency in our system; tumoral conditions, when a cell degenerates and the immune system is immune surveillance system is activated to a greater or lesser extent — we know, for example, that the sun causes cutaneous immunosuppression, which can allow cancers to develop, and that the system is not able to detect them; inflammatory conditions in which the system carries out a task excessively or in a disorderly way, causing psoriasis or eczema; or autoimmune diseases in which our system attacks our own body, as is the case with lupus erythematosus. The immune system is always working; in fact, our skin is our first line of defense against the external environment. In situations like this, we can see just how connected it is to the nervous system. In less happy times, we get sick more.

Q: Other factors that can impact our skin health are the effects of pollution and a lack of light due to lockdown, which can also affect our stores of vitamin D. What ramifications do these aspects have?
A: In large cities, fumes contaminate the skin and can make inflammatory processes and acne worse — but this should have improved over the last few months when our cities have been free of smog. But as we’ve been confined to our homes, our synthesis of vitamin D has ground to a halt. It’s been three months and we are now detecting low levels in elderly people, postmenopausal women, and people with osteoporosis or other bone problems, which must be corrected. It doesn’t take much: just 15 minutes of sun exposure is enough. Some people have managed to get the required amount in front of a window or on their balcony.

”The immune system is always there; in fact, our skin is our first line of defense. In less happy times, we get sick more.

Q: What should we pay attention to in other groups, such as children and adolescents?
A: I have to take my hat off to how they’ve behaved — how they’ve adapted to new technologies, video calls, using consoles for group play, all of which have increased massively during the pandemic as it has allowed them to stay in touch with the outside world. But leaving the house means they should be leaving this behind. As parents, we should make sure that their technology use has gone back to normal and that they haven’t developed myopia or cervical spine deviations due to bad posture; in general, that they’re going outside and stretching their legs more.

Q: According to the British Journal of Dermatology, there are five patterns in the cutaneous manifestations associated with COVID-19. What should we look out for?
A: I’d like to note that this article has blown up around the world. Its authors, two dermatologists called Cristina Galván and Alba Catalá and a doctor called Gregorio Carretero, who participated in the project as part of the AEDV, allowed all Spanish dermatologists to contribute. Thanks to those Spanish dermatologists, in two weeks, they had collected 375 cases — so many that the journal was able to publish an atlas of pathologies related to SARS-CoV2. Patterns could be identified, with some being linked to the most severe manifestations of the virus such as purpuric eruptions or necrotic lesions, demonstrating changes in the vascular system. These lesions are purple or very dark red in color, and they don’t disappear when you apply pressure to them with your finger. There are also cases of eczema and blisters that have to be seen by specialists.

Action should be taken when there are respiratory problems too; if you have symptoms of a cough, fever or discomfort, as well as a skin lesion. But there’s a very characteristic pattern—chilblains on children’s arms, lesions on their fingers and toes—which is not associated with serious manifestations of the virus. These children are incredible, but it’s a reason to book a consultation with a pediatrician so they can try and do a test, because if the results are positive, they could be contagious.

Q: It’s summer in the northern hemisphere and winter in the south, so we have more extreme temperatures. How can we look after ourselves better during this time?
A: We have to be aware of the risks of prolonged sun exposure, especially the first few times, because we’re seeing a lot of burns. It’s important that we use a sunscreen with a high SPF (at least SPF 50) and avoid being out in the sun between the hours of 12 noon and 4 pm. We also have to take extra care of children, even when they’re just out walking or riding a bike, putting sunscreen on them at home so it becomes part of their routine and they are fully protected. In some areas, ultraviolet radiation is currently at its highest. Oral protection (antioxidants, formulas that help repair cells) is interesting and can be used in conjunction with other options, but topical protection must be reapplied every hour or hour and a half, and children should wear things like hats, sunglasses and shirts that filter radiation.

Q: Can you give us any tips or recommendations to help mitigate the effects that hygiene measures, such as frequent handwashing, the use of hand gel, or masks, visors or glasses, have on our skin?
A: Healthcare workers that have been using protective measures and PPE have developed all kinds of conditions due to the protection rubbing on their skin, existing problems, or their skin getting clogged up. We recommend using repair formulas and creams, wearing the protection properly, and so on. For other people, we recommend alternating washing with soap, which has more of a drying effect, with using hand gel — preferably a high quality one as they’re less aggressive. And use restorative moisturizers often. All skin conditions get worse with humidity and heat. Masks can cause problems, but they’re a must. At home, it’s recommended that you take them off, wash your face well, and apply a suitable moisturizer. That should do the trick.

Q: What does the future hold? Will this uncertainty keep causing our skin to flare up?
A: Skin has always been and will always be an important organ, and there’s a lot that remains to be seen. There are conditions that we have to do more research into, such as inflammatory conditions, orphan diseases, and those that are often considered solely esthetic but aren’t because they affect the patient’s life, such as alopecia and vitiligo. Some doors are already open but studies and research could open many more. It makes me very angry when skin problems are dismissed. They don’t tend to be life-threatening, but patients have to live with them for their entire lives, and society can be cruel with these types of illnesses, they’re looked down on. 99 percent of these conditions are not contagious. People need to be more respectful. We can’t even begin to imagine how brave these patients are, because it’s a struggle just to get up in the morning and go to work, facing the world through the pain, burning and discomfort. Nothing’s going to happen if your towel ends up near someone with psoriasis and there are times when these patients need that time outside for their treatment. We see it every day — there needs to be more awareness and education.