“Technology is the basis of states’ economic power”

We spoke with José Ignacio Torreblanca, senior researcher and manager of the Madrid office of the European Council on Foreign Relations (ECFR), who set out his vision of the international panorama in the presentation “A complex world. Geopolitical analysis,” at the 28th International Conference by MAPFRE Global Risks.

The think tank that he directs in Spain is one of the main centers of thought in Europe, focused on promoting a greater union of the continent. Torreblanca, a former opinion editor of the newspaper El País, warns that the world is moving from an order based on rules to one based on power, and in this situation, the relevance of Europeans depends on their technological development, a race in which, at present, they are far behind other countries such as the United States and China.

Technology is the basis of states’ economic power. Technology generates inequalities. Within societies, it empowers some and disempowers others; between states, it makes some stronger and others weaker.

We Europeans have forgotten that technological mastery is what allowed us to achieve the place we had in the world in the past, with very few economic and military resources, because supremacy was absolute. That is why China is so aware that it has to guarantee its technological sovereignty. The United States has also realized this, and as long as things have been going well, it has not minded China using American technologies, but this situation is changing. Now there is a Cold War, a technological war, to keep the other from benefiting from your innovations.

You cannot talk about international relations without mentioning the war in Ukraine. How has the scenario changed?

It has been a significant shock to the European order and, by extension, to the global order. It is a major disruption that also caught us by surprise, in the sense that the world is focused on the transition of power between China and the United States, which is the most prominent trend of the 21st century, and yet this war seems to be a legacy of a 20th century that has not ended. It has confronted us Europeans with two very uncomfortable truths: we are consumers and not producers of security and energy. And these are two powerful vectors of weakness that make us very vulnerable and very dependent. 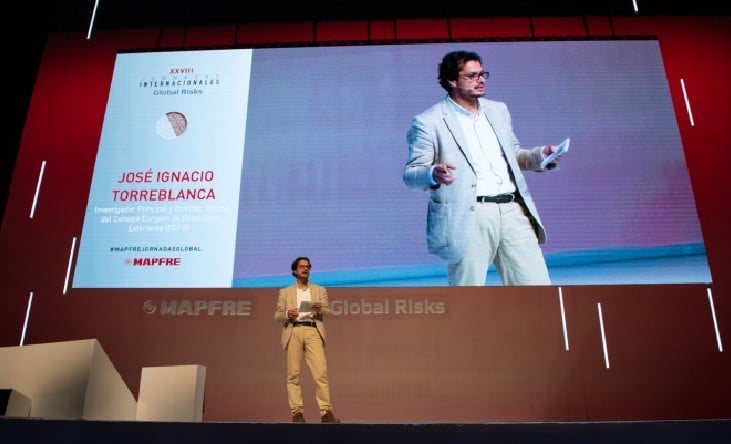 At this MAPFRE Global Risks Conference, there has been talk of a return to an environment similar to the Cold War, but the world is no longer the same. What are the differences between now and then?

The world is not the same because the Cold War meant the existence of two blocks isolated from each other, and therefore there was no interdependence between them, or those interdependences were limited to the maximum. Now we are in a very paradoxical situation, in which we have a maximum of interdependence but simultaneously a maximum of geopolitical tension. And so, all those dependencies you thought guaranteed peace for you now become weaknesses. What do states do? They try to decouple, to reduce those interdependencies, but you cannot think that you will end up in a situation where the trade between the US and China is like the trade between the US and the USSR, which was about $2 billion a year. We are in the process of decoupling, de-globalization, fragmentation, and so forth. We have seen in the pandemic that, from health to technology, there are elements that are vulnerabilities and that others are ready to exploit.

In this context, has disinformation reached a new dimension? Is it used as another weapon?

We speak of disinformation as organized campaigns of influence that deliberately confuse, harm, and affect democratic legitimacy, which can come from within or outside. And that is possible thanks to the vulnerabilities of the social networks because they were not made for the information circulating through them to be verified. They were not thought of as media, so the controls needed to make them work effectively were not implemented from the beginning. Something that we thought would be an advantage of democracies over dictatorships, for example with the Arab Spring, has become a vulnerability, because we are victims of our openness and open technology. While other countries can build digital walls, we cannot live in a closed information space because then we would be like dictatorships.