Recent history has witnessed great advances in health, which have increased life expectancy in developed countries to unprecedented levels, a phenomenon that developing nations have also begun to experience. In the process, improvements in medicine and technology have increased longevity along with well-being, changing the way in which the elderly and people with disabilities can enjoy their lives. But demographic shifts have also meant an increase in the number of people in a situation of dependency, a problem to which societies have not yet given a sufficient response.

What do we mean by dependency?

The definition of dependency is broad, but it could be summarized as dealing with people who need help to carry out their daily lives. This is the key, the vast possibilities of daily actions that the majority of the population performs without difficulty but can be a real impediment for dependents. These are acts such as hygiene, eating, going to the bathroom, getting dressed, and even just getting out of bed. The figures give no doubt as to the scale of the problem: around 4% of the adult population of the European Union is dependent, according to Eurostat. 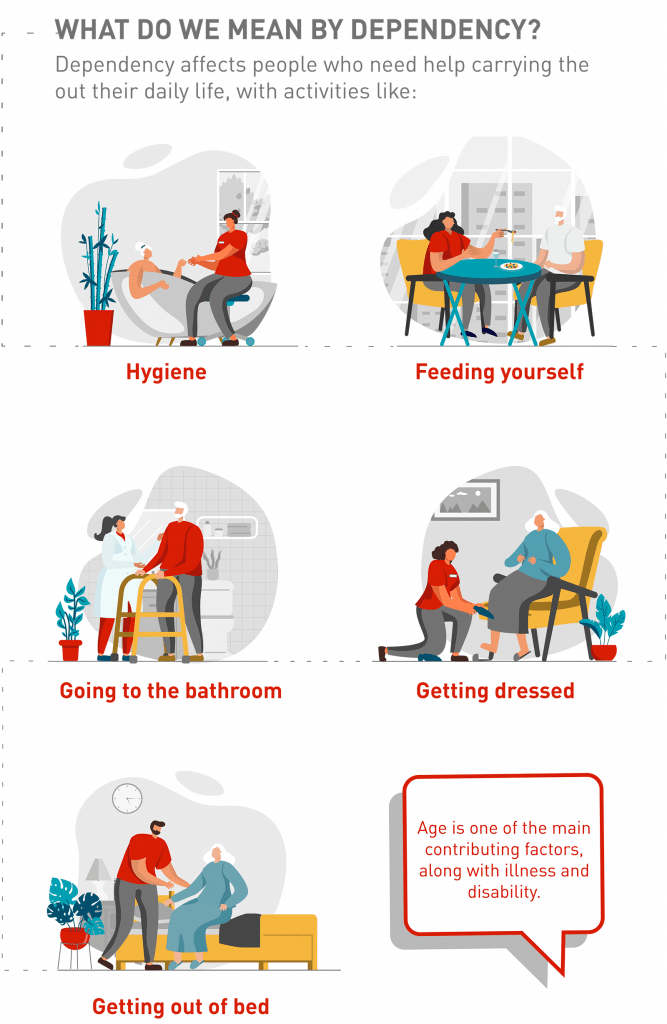 Dependency is caused by factors such as age, illness, and disability. All predictions, however, agree that the number of dependents will multiply with the aging of the population, a trend that is unstoppable. In the OECD (the organization that brings together most developed countries), life expectancy in 1970 averaged 70 years. Just before the pandemic, it had already reached 81 and will continue to rise. Thus, the over-65s, who were 9% of the total population of these countries in 1960, now account for 17.3% and will account for 26.7% in 2050. The over-80s, the group that suffers most from dependency, today account for 4.6 % of the population. In 2050, there will be more than twice as many as today. 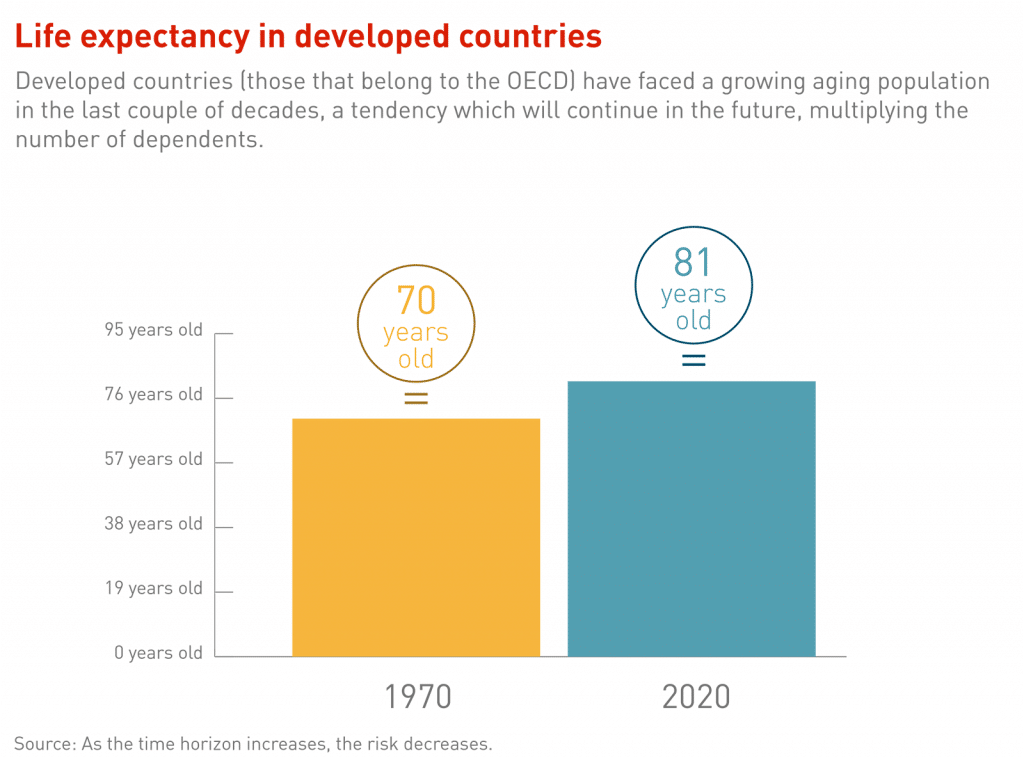 These are data that tell us about the years of life, but not about its quality. Eurostat has created an index that distinguishes between years of “healthy life” and years of “limited activity.” A citizen of the European Union who reaches the age of 65 can expect, on average, to reach 86.6 years for women and up to 83.1 for men. However, half of that time, almost 10 years in both cases, would be spent living with “limited activity,” i.e., depending on others.

There are large differences in this indicator, which shows that various health and care systems, and even lifestyles, can prolong the healthy life of the elderly. For example, in countries such as Sweden, healthy life spans almost three quarters of old age, to over 80 years; in Latvia it is less than one third, just over 5 years from the age of 65. 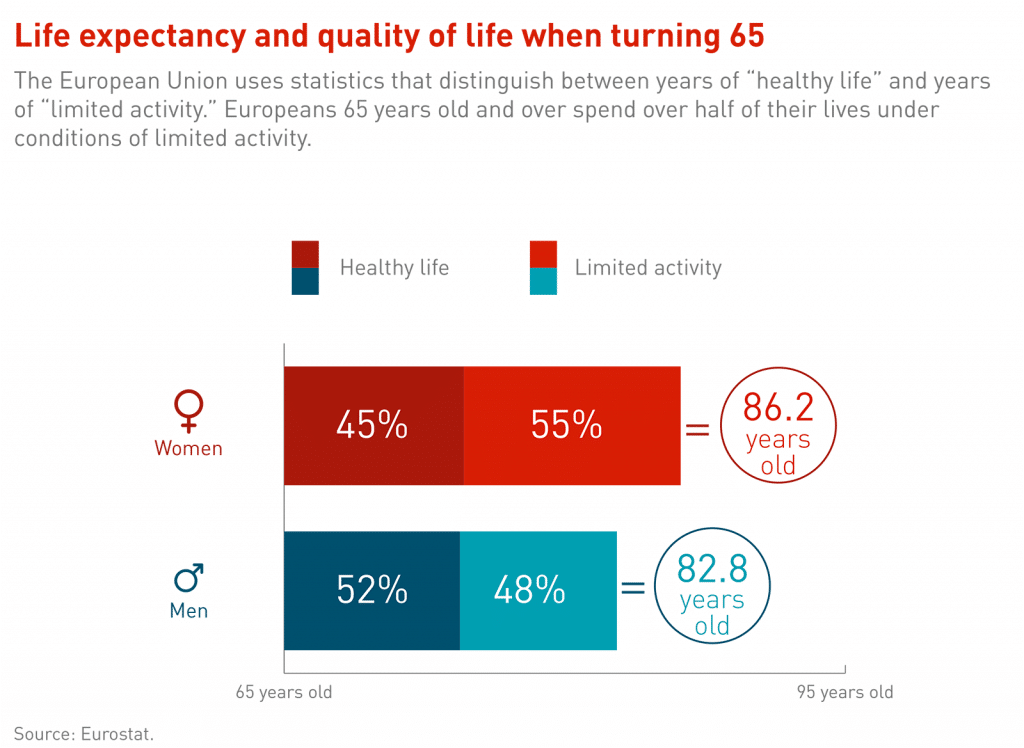 Two fronts are therefore opening up. First, the “gray hair revolution,” or the growing weight of the elderly in the active economy, due to the increase in this population and their greater capacity for consumption, which means that their leisure needs—and desires—are being considered, which is very visible in sectors such as tourism. In this field, Fundación MAPFRE’s Ageingnomics Research Center is dedicated to deepening knowledge of the habits and trends in this age group halfway between work and retirement, and to revealing the opportunities it represents.

At the same time, society faces the challenge of providing a response to the elderly who can no longer look after themselves. Dependency varies in degree. There are many people who do not require complete assistance, and with some help they can see great progress in their personal independence, which is the objective that any action plan for dependents should have. This concept is receiving more and more attention as this problem becomes more widespread in society.

Admission to a geriatric center is one option. And it may be the most appropriate when a person’s health and abilities have reached significant deterioration. But there are also intermediate solutions, which have the positive effect of not separating the elderly from their normal environment, such as day centers or regular assistance, set up by hours or days. This is where the role of a caregiver comes into play, whether professional or, as is often the case, a family member or relative, which is closely linked to dependency in the elderly. It is, in any case, a difficult situation for the people who suffer from it and their families.

The needs of the elderly have been one of MAPFRE’s lines of work for years, during which it has encountered the reality of dependency in the elderly and has been able to offer some solutions. These are exclusive benefits for clients in this age group, assistance with problems such as mobility or specific services, with the common denominator that they seek to improve the lives of the elderly when their abilities begin to be diminished.

For example, some insurance policies for the elderly already include a set of hours of various assistance services with the aim of responding to the limitations of movement affecting this group. The aim is to support them in their daily needs and not just to offer them financial compensation. Along the same lines is telepharmacy, which is the possibility of having a professional bring medication to the home of the elderly person requesting it, one of the benefits of the teCuidamos loyalty plan.

In old age, many people may begin to encounter obstacles in what had been their lifelong home. Therefore, the reform and adaptation of housing for the elderly and dependents is one of the options offered by MULTIMAP, whose professionals are working to design the spaces that allow the elderly to continue living where they want.

In addition, although 1.2 million people in Spain already receive some kind of public aid for dependency, this has been requested by 1.9 million. In light of this situation, MAPFRE has launched a dependency insurance policy for seniors, which guarantees a monthly benefit for life to elderly people who fall into this situation. It offers protection from the outset, without the need for any declaration from an official body, only the recognition by an expert from the company based on objective medical criteria. This insurance is based on the idea that access to dependency services must be guaranteed quickly and rapidly.

These proposals are aimed at increasing the independence, well-being and peace of mind of a growing part of the population. Providing them with the care and attention they need is now one of society’s main challenges.