MAPFRE’s consolidated revenue in 2019 increased by 7% to 28.5 billion euros, and the attributable result amounted to 609 million euros, representing a 15 percent increase with respect to the previous year.

The Group’s consolidated revenue reached 28.5 billion euros, with an increase of 7 percent, mainly due to the rise in premium issuing and greater financial income.
Million euros.

Premiums from direct insurance and accepted reinsurance reached 23 billion euros, with an increase of 2 percent, primarily due to positive development in countries like Spain, Mexico, Peru and the Dominican Republic.
Non-Life premiums grew 3 percent, marked mainly by the effect of issuing the multi-year PEMEX policy in Mexico, which was renewed in June. IBERIA’s contribution to Non-Life business is also noteworthy, increasing over 4%. Life premiums increased by 0.2 percent, of which Life-Protection grew 8 percent, primarily from the positive development of this business in Brazil (+12 percent) and Spain (+10 percent). However, Life-Savings fell 6 percent, primarily from the fall of issuing in Spain and Malta, in a complicated economic environment for the sale of these products.

The Group’s combined ratio remained stable and stood at 97.6% at the close of December, with remarkable improvements in Brazil, North America and Latam North, thanks to the measures taken to achieve profitable growth. The combined ratio of the insurance units improved 1.3 percentage points and stood at 96.5%.

The attributable result to December 2019 reached 609 million euros, a rise of 15 percent. Excluding the goodwill writedowns in the year, this result would have stood at 675 million euros.
Million euros.

Total assets reached 72.5 billion euros at December 31, 2019 and grew 8 percent compared to the close of the previous year. These changes include increases in financial investments and in technical provisions, due to financial market movements and the growth from insurance activity.

The increase in shareholders’ equity also reflects the improvement in the market value of financial assets available for sale, and the positive development of currency conversion differences, primarily from the appreciation of the US dollar, helping to offset the fall in the Brazilian real and the Turkish lira.

The Solvency II ratio for MAPFRE Group stood at 195 percent at September 30, 2019, compared to 190 percent at the close of December 2018. The ratio maintained great solidity and stability, backed by high levels of diversification and strict investment and ALM policies. 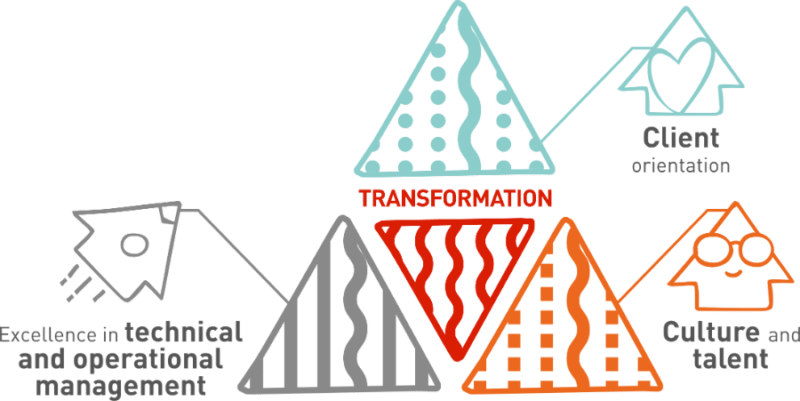 At MAPFRE we are transforming to grow profitably. Digitization and innovation are key for this evolution. Transformation will be ever present in all that we do, acting as a veritable driver across the entire company. Our strategy is based on three pillars: client orientation, excellence in technical and operational management, and culture and talent.

Our team is 100% client oriented. We are committed to a competitive model, which puts clients at the center of everything we do, with the aim of offering an optimal experience at every moment of contact with MAPFRE. We want to know, understand and enhance customer loyalty; increase productivity in all our channels and innovate in products, services and experiences for our clients.

We work to improve our efficiency, adapting our structure to offer an excellent service, with a global, flexible and open technology that enables us to increase our competitiveness.

Strengthening the commitment of everyone working at MAPFRE, we wish to continue adapting to changes with new skills that allow us to face future challenges.

We continue working to become a benchmark for sustainability. MAPFRE is a group committed to sustainable development and, especially, with the fight against climate change.

MAPFRE shareholders received on December 23rd, the dividend paid from the 2019 financial year results. To be specific, shareholders received 0.0606 euros gross per share, after having applied the amount corresponding to treasury stock proportionately to the remaining shares. This dividend was agreed by the Board of Directors in September.

Responsible investment is a part of MAPFRE’s social commitment

The CFO and Member of the Board of MAPFRE, Fernando Mata, participated in the VIII Edition of the “Empresas que aportan valor al accionista” (“Companies that offer value to the shareholder”) sessions, organized by the journal el Economista. The principles of responsible investment fit perfectly into MAPFRE’s social commitment and are a part of the company’s DNA. As such, investments that combine the assets’ financial returns with their social returns are a focus of the company.

MAPFRE AM, the MAPFRE’s asset management unit, and its French partner, La Financière Responsable (LFR), have launched a new fund that invests in companies that promote the inclusion of people with disabilities. MAPFRE “Inclusión Responsible” has been included in the United Nations Global Compact report as an example of best practices.

MAPFRE launches “PIAS 6M”, a new Life Saving product with unlimited duration and revisable interest. It is a long-term insurance savings product that can be taken out with a single or regular premium, and also makes it possible to make additional contributions at any time.

MAPFRE promises its shareholders it will maintain the dividend policy

Fernando Mata, CFO and member of the Board of MAPFRE, José Luis Jiménez, Chief Investment Officer, and Natalia Núñez, Investor Relations and Capital Markets Director, met with MAPFRE shareholders in Madrid and Barcelona to talk about the results for the first nine months of the year, as well as macroeconomic forecasts that will affect business.

MAPFRE strengthens its Life-Savings insurance offer with the launch of Valor Activo II, a new Unit Linked product, with a single premium and a duration of 2 years and 2 months, tied to the performance of the Eurostoxx Select Dividend 30 index.

MAPFRE Puente Garantizado, a new Pension Plan for clients who want guarantees for their investment

MAPFRE launches Puente Garantizado, a Pension Plan especially designed for clients who do not want to take on any risk with their retirement savings, and who want to invest with the security that their capital is guaranteed at maturity.

MAPFRE, through its asset-management company, MAPFRE AM, has finalized a strategic alliance with New York-based Boyar Asset Management, to strengthen both its research capabilities and returns in this asset class

On December 23, the interim dividend for 2019 results of 0.06 euros gross per share was distributed.