Can Artificial Intelligence make life easier for people with disabilities?

“Technology has changed the world, bringing knowledge within reach and expanding a range of opportunities. Persons with disabilities can benefit enormously from such advances, yet too many lack access to these essential tools.” These words were spoken by former UN Secretary-General Ban Ki-moon in 2014, and remain as relevant today as they did then.

Ban Ki-moon also pointed out that technology could help people with disabilities to harness their full potential within their communities and workplaces, and make the most of their capabilities. Six years later, advances have been made, and technologies such as Artificial Intelligence have made major steps forward, so much so that it is shaping up to be a key tool for including people with disabilities in a society that tends to segregate them.

This is precisely the most important issue when it comes to technology and disability. There is no doubt that advances greatly help people who suffer from physical, sensory or mental disabilities (the many examples of which will be covered later), however, it is also true that this same technology can oftentimes end up excluding these people even more if they are not taken into account.

According to the article, ‘Inteligencia Artificial y Personas con Discapacidad desde una visión exigente de derechos humanos’ (Artificial Intelligence and People with Disabilities from a Demanding View of Human Rights) by the Comité Español de Representantes de Personas con Discapacidad (CERMI — Spanish Committee of Representatives of Persons with Disabilities), there are risks involved when using Artificial Intelligence, as they detected “discrimination against social groups whose rights such as gender, race or immigration situation are more exposed to being violated,” to which they also added that “recent studies show that people with disabilities, both women and men, are not alien to this phenomenon, very often through multiple and cross-sectional discrimination.”

CERMI points out both the main dangers of exclusive use of AI and the great benefits of inclusive use, i.e. encouraging separation or evolving toward ever-increasing inclusion.

Joan Pahisa, who has a PhD in Computer Science and is an expert in Accessible Technology and R&D at Fundación ONCE, also spoke about this potential reality, stating that both technology in general and AI in particular tend to succumb to society’s usual prejudices. The fact is, if programmers are barely even aware of the reality of people with disabilities, the resulting Artificial Intelligence will suffer from that capacity to learn, so it will end up excluding people with disabilities.

Despite these logical fears, new technologies undoubtedly provide a fantastic opportunity to improve the lives of people with disabilities.

CERMI points out numerous benefits, of which the following are most notable:

In addition to highlighting some risks, the aforementioned Joan Pahisa also mentioned the great potential that AI has through examples such as “algorithms that read texts and recognize images, devices that transcribe conversations for people with hearing difficulties, home automation that allows you to control the lights, remote window blinds and thermostats, assistive robots and countless other solutions that already facilitate independence for many people.”

In fact, many projects are currently underway around the world, as Artificial Intelligence applications have enormous potential for people with all kinds of disabilities (visual, auditory, cognitive, mobility, learning, etc.).

There are many examples in this regard. One such example is in Poland, where a project named INSENSION has been developed that aims to better understand the needs of people with multiple and severe intellectual disabilities. An Artificial Intelligence system analyzes each person through audio and video and deciphers what each movement, gesture or sound means. This helps their caregivers, who can then better care for their patients.

Another example is the initiative launched by Microsoft in 2018, AI for Accessibility, which identifies projects aimed at improving accessibility for people with disabilities. 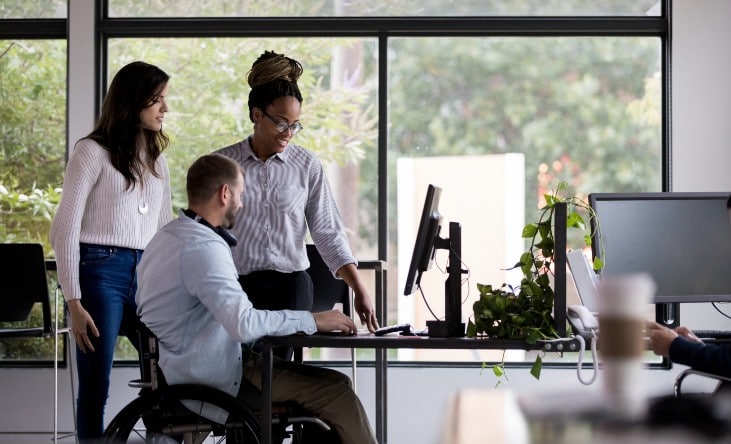 As for progress in the working environment, the Adecco Foundation and Keysight created the Fourth Technology and Disability Report, according to which new technologies have improved the overall quality of life of six out of ten people with disabilities.

What’s more, the report also claims that “new generations are facing a professional future in which they can work, breaking the outdated tradition that associates people with disabilities with inactivity and dependence.”

Technology has helped people with disabilities to be able to hold job positions that they previously never used to, with everything that this entails in terms of social exclusion and the loss of assets with great capabilities.

As Mike Hess, a US-based entrepreneur and founder of The Blind Institute of Technology, put it in an interview where he showed no hesitation in describing losing his sight as an inconvenience, nothing more: “I’m married, I’m a father to three children, I’ve competed in martial arts, I ski, climb mountains and I’ve had a successful 20-year career in the tech industry.”

In fact, Mike Hess is certain that “people with disabilities are the greatest untapped resource on the planet: we are the perfect candidates for what I call ‘desk jockey’ type jobs. Today’s technology is so accessible, and people with disabilities are extremely productive and loyal employees. In some ways, they are more productive than sighted people.”

After all, pointed out in each product made at the Centro Don Orione de Posada de Llanes (in Spain), it is the result of a “job done by a person with a disability and many other abilities.” And now, through new technologies, these many other abilities can be developed more easily.